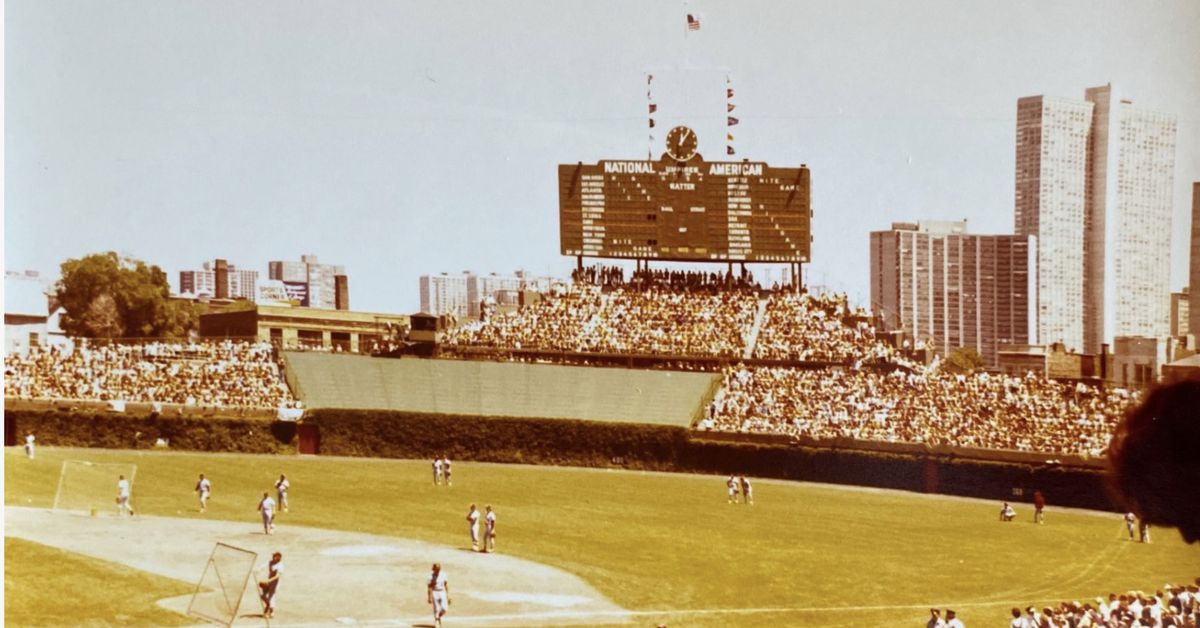 This photo was sent to me by Steve Sher, BCB reader, from a photo album left by his mother.

It’s a beautiful view of a time spent at Wrigley Field.

Let’s look at what we see here. First, there are six flags on the NL standings yards on the scoreboard, so it must be 1969 or later. On the American League side of the table, you can see TORONTO, which dates it to 1977 or later. When Tribune Company bought the team, one of the first things they did was paint the red doors on the exterior walls a shade of aqua, so now we’re down to 1977-81.

The Cubs host the Cardinals. It’s almost certainly a weekday afternoon, as most games are listed as NITE GAME, although with a handful of daytime games listed, it could be a Saturday. It’s 12:05 p.m. and the outfielders are hanging out on the outfield, so it’s during batting practice. Weekday games at this time started at 1:35 a.m. and weekend games at 1:15 a.m. It’s clearly the peak of summer, with ivy on the walls, so we can eliminate any April or early May games from those five seasons.

The only match to match this, along with all the other matchups on the board, was on Saturday, July 9, 1977.

So what is the error?

The table lists ATLANTA/SAN FRANCISCO as a night game. It wasn’t, as you can see in this screenshot from today’s Tribune:

A small mistake, yes, but a mistake nonetheless.

As you can also see in this image, the Cubs were flying high going into this game with a 51-29 record, leading the NL East by four games. It was the year that many of us thought we had to make up for in 1969.

This was not the case. The Cubs lost that July 9, 1977 game 4-3. You see by the schedule that Cubs starter Steve Renko had no W/L record. He had missed much of the start of this season after having his thyroid removed. He didn’t pitch much, or well, for the Cubs and in August they traded him to the White Sox for Larry Anderson, a reliever who had never pitched in an MLB game for the Cubs. Anderson was traded to the Phillies a year later for Davey Johnson. Meanwhile, Renko recovered and pitched through 1983, posting some very good years for the Red Sox in 1979 and 1980.

The Cubs finished the first half of the season at 51-30. What could go wrong?

Everything, basically. They went 30-51 in the second half – the National League’s worst record – to finish just 0.500 away, and had to lose their last five games to get there.