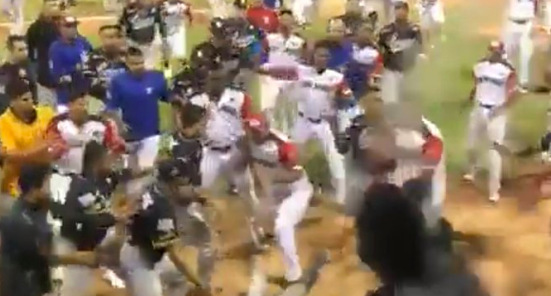 A viral video that has exploded all over Twitter and numerous news sites shows two Venezuelan Winter League baseball teams in a massive brawl involving players and fans.

Reports say the fight took place on Sunday, but if the video looks eerily familiar, that’s because the event actually happened in 2018.

Here’s the Baseball Fight Club Twitter post that apparently tricked the media. The account, which has more than 115,000 followers, does not represent the fight as a recent event.

But somewhere along the way, the fight that happened in 2018 was picked up by a news site, which reported that it happened on Sunday. Everyone followed the example of this site. Among the sites that presented the video as news: the New York PostBarstool Sports, Outkick, The Big Lead and Yardbarker, plus many lesser known sites.

Yahoo Sports reported at the time that the brawl had broken out between La Guaira and Caracas.

Caracas right fielder Felix Perez is the player who breaks free from the restraints of several other teammates and rushes onto the field to step up a gear. As the crowd heads for the stands, former MLB catcher Hector Sanchez flattens Perez with a punch worthy of a heavyweight.

Surprisingly, only four players were sent off as a result of the fight.

If there’s a lesson to be learned from this, it’s to remember the old X-files slogan: “Trust no one.”

It may sound cynical, but things are getting even weirder in the media world these days. Elon Musk’s New Twitter Verification Policy led to potential for widespread misinformation regarding player announcements and more.