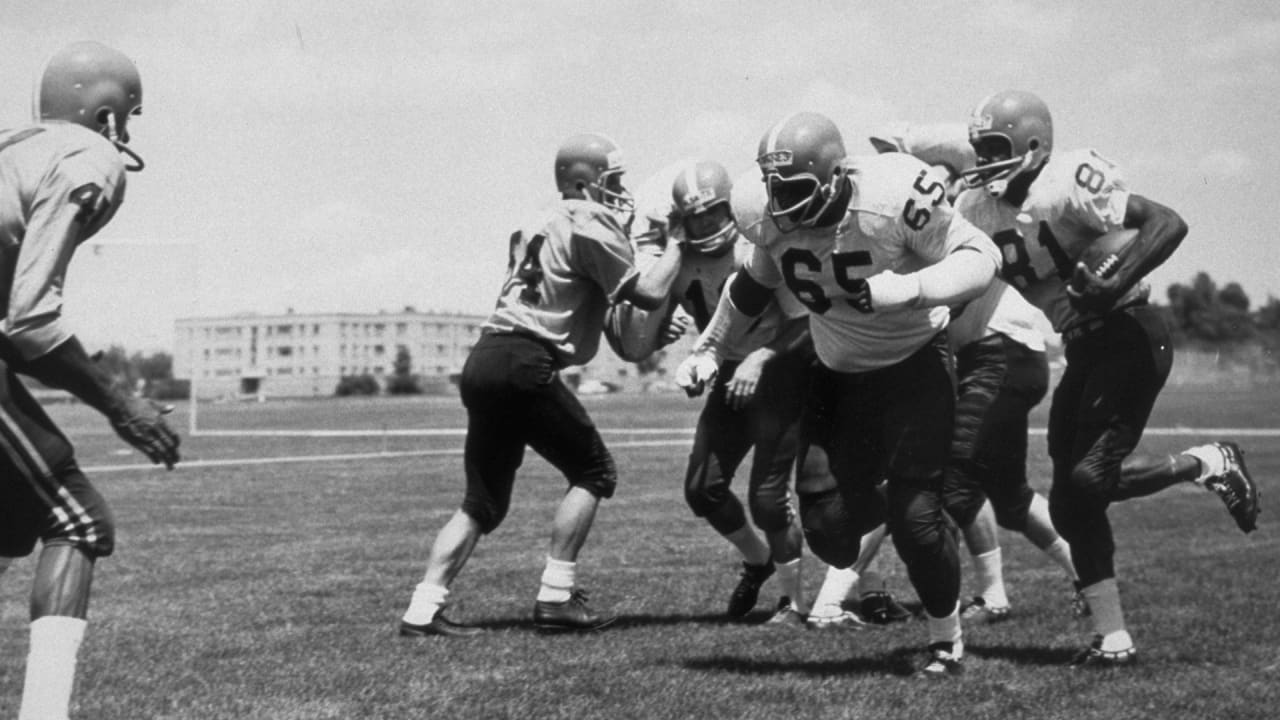 The Denver Broncos are about to open one of the most anticipated training camps in team history.

Recently, 9NEWS’ Mike Klis reported that in a team-building effort, veterans will join rookies and other young players at the team hotel for camp. Looking at the reports so far, it looks like a team that has bonded together so far and everything indicates that veterans are embracing the concept.

It hasn’t always been the case for the team to stick together during camp, as each coaching staff takes different approaches. But decades ago, that was how the team operated – just not by choice.

Back when the Broncos started in 1960, their first training camp was at the Colorado School of Mines in Golden. These first two camps were memorable primarily for their spartan nature. The players did not have their own bedrooms, but instead slept on cots in the school gymnasium.

The meals were best described as hash served by the dining room staff and noted as being all the Broncos could afford, which was next to nothing.

The Broncos had a three-person coaching staff, including head coach Frank Filchock, and his practices looked a lot like touch football games at the time. I realize the reader might say it can’t be, but it was.

The team trained at Colorado State University in Fort Collins from 1962 to 1964, a move by new head coach Jack Faulkner, who also chaired the team changing the colors to orange and blue and created the first playbook in Broncos history.

But they returned to Mines for the 1965 and 1966 seasons. Of particular note is that Denver Bears (Triple-A baseball team) general manager Jim Burris held the same role for the Broncos during this period, in order to save money for the team. It did not work.

The team moved from its headquarters at the Quonset Hut and 5700 Logan address in 1967, and they had a training camp at team headquarters from 1967 to 1971.

So this is not the first time the team had a training camp at headquarters. All players stayed at the Merchandise Mart Hotel, from where they could easily walk to practice.

Lou Saban was the head coach, and he deserves special mention for bringing the franchise out of the Stone Age, but he had a lot of work to do. They had never had such a winning season.

I remember driving there to watch training camp practices, and there was genuine excitement to be able to see the team up close. Fans, like me at the time, could stand next to the chain-link fence of the facility and see it all, hear it all, and develop real emotional connections with the team.

I well remember that Adams County officers initially issued a ticket to every car because every car was illegally parked. This prompted the Broncos to call an unelected but powerful Adams County official (and in terms of full disclosure, a parent) saying it was hurting our newly growing fan base. Sure enough, the Adams County sheriffs arrived and took all the tickets from all the automobiles. No one who parked there to practice has ever received a ticket.

When Lou passed away and resigned, the Broncos reached out to the West Coast and hired John Ralston, who was here from 1972 to 1976.

During his first four seasons, he decided that training camp should be held in California, at Cal Poly-Pomona. The Broncos didn’t have many (or any) fans in training camp practices at the time, but it was the pinnacle of professionalism at the time in professional football.

They went back to Colorado and CSU from 1976 to 1981, and those were the first camps I attended as an employee.

They were tough and tough times. When the Broncos’ first playoff team and Super Bowl team were created, the Broncos were trying to trade former CU Buffalo Mike Montler, who was unhappy with his current team, the Buffalo Bills.

When Denver completed the trade, Montler rode his bike from his Boulder home to Fort Collins. Before college, he had served as a snag in the United States Marine Corps, and he looked like a Marine. Only bigger. I remember when he was playing CU he looked like a man among boys, which was really pretty accurate.

A great guy, he took over the offensive line and started for the first Super Bowl season, including all playoff games.

In 1979, we had a kicker named David Jacobs, a 12th-round draft pick from Syracuse. He was a nice young man, which those who know me know that “nice young man” is a euphemism meaning that he was the measure of his abilities.

Jacobs had a good camp before the veterans showed up. Beautiful practices, beautiful newspaper articles. Then came kicker Jim Turner, snapper Bobby Maples and starter Norris Weese. I was there when Turner congratulated Jacobs on his success and announced that it was all over. The next day, all the shots and takes for Turner were perfect, and they were just the opposite for Jacobs.

He was soon gone. In those days, a rookie had to overcome a lot to hold the position of a popular veteran. It was daunting and not an easy task.

Defensive end Lyle Alzado did it often, always after the bed check was over, and he made a point of squealing his brakes when he pulled out of the parking lot.

I remember head coach Red Miller asking the coach who did the bed check if everyone was in their room when the bed check was done. Receiving an affirmative answer, they continued their meetings. The prevailing philosophy at the time was that if someone could gamble, their level of play determined what was tolerated.

The Broncos trained at the University of Northern Colorado in Greeley from 1982 to 2002, by far the longest consecutive stint at one location. We moved the camp to our team headquarters in 2003, and it has remained there ever since.

It marked a new era of professionalism and tranquility in the NFL, and fewer stories from fewer characters here and elsewhere.

That pretty much describes the 2022 Broncos, which is why that hill from which fans watch practice will be packed this year, and the adjacent team store is already gearing up for massive business.