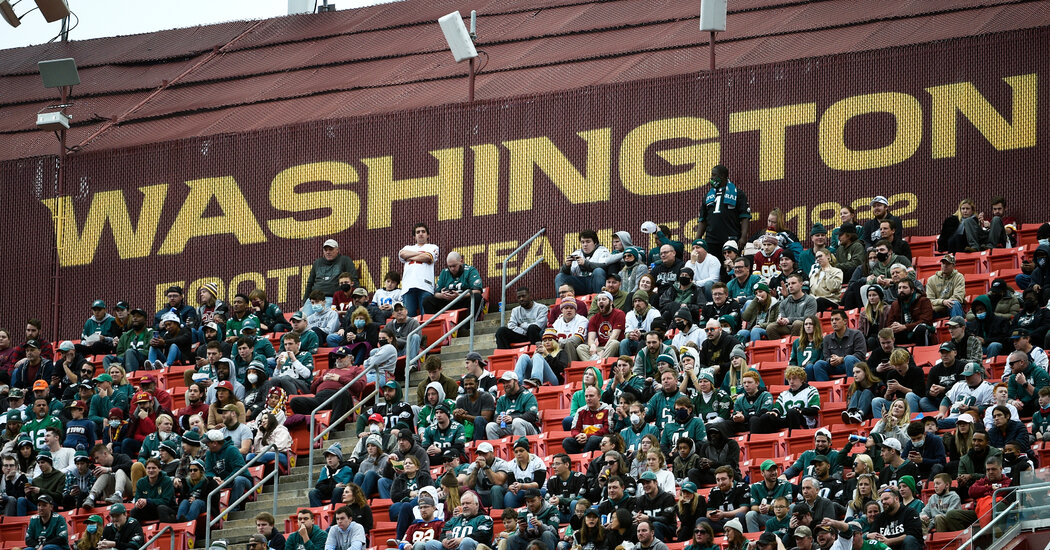 The Washington football team will have a new name on Wednesday

The Washington football team, which had used a name closer to a football club as a substitute to get away from a racial slur, is ready to reveal a new identity.

Nearly two years after dropping its longstanding name and logo, the team will reveal its replacements on Wednesday, completing the renaming of an organization that in recent years has been plagued by off-field scandals and dismal performance on the field.

The team said it would keep its traditional burgundy and gold colors. He also teased some potential nicknames, like the RedWolves, Admirals, Generals, Armada and Presidents, in social media announcements and statements from Jason Wright, the team’s president.

Wright, in statements posted on the team’s website, removed certain names from the contention because they conflicted with trademarks held by other teams, including two variations of the RedWolves name, which had been favored by some fans.

On Tuesday, Joe Theismann, the former quarterback who helped the team win one of its three Super Bowl titles, teased another contender. In an interview with CBS Sports Radio, Theismann said he thought Commanders was a name “that will hopefully be talked about moving forward.” Footage from the local NBC affiliate A helicopter camera showed a banner reading “Commanders” inside the team’s stadium on Tuesday evening.

Whatever the name, the process was unusual. Teams are sometimes renamed or rebranded as they move to different cities or are sold to new owners. The Rams kept their name and colors but changed their logo and uniforms when they moved from St. Louis to Los Angeles before the 2016 season. In Major League Baseball, the Marlins replaced Florida with Miami as their name when they moved to a stadium within the city limits. The current Cleveland Browns are a reactivated version of the team after Art Modell moved his version to Baltimore and it became the Ravens.

The Washington football team, however, took on a new identity under duress. Team owner Daniel Snyder for years resisted calls from fans, sponsors and Native American groups to drop the previous franchise’s name, which had long been considered a racial slur of Native Americans. Snyder also fought off legal challenges seeking to strip the team of its trademarks.

But in July 2020, following the police killing of George Floyd and a subsequent national debate over the treatment of non-white people, Snyder relented and dropped the name “Redskins,” which had existed for 87 years. .

Unlike previous calls to change the name, Snyder also faced pressure from sponsors like Nike, Pepsi and FedEx, who threatened to remove his corporate name from the team’s stadium in Maryland if no action was taken. .

To save time, the team used a generic identifier as they began a search for a new name and logo.

Meanwhile, the Cleveland MLB team dropped its longtime name, which also included Native American imagery, and changed it to Guardians.

In some ways, the development of a new name and logo has been a welcome distraction for a club plagued by negative news. For most of 2020 and 2021, Snyder has been embroiled in a contentious bout with three longtime limited franchise partners. After several rounds of bashing and court battles, the league’s owners agreed to let Snyder buy out his former partners for $875 million and fully consolidate his ownership of the team.

At the same time, the league resumed an investigation into reports of widespread harassment of women who worked for the team, allegations that dated back nearly two decades. In July, NFL Commissioner Roger Goodell fined the franchise a record $10 million and ordered Snyder to stay away from team facilities for several months.

He was, however, allowed to continue the team’s search for a new name and logo, as well as a new stadium. Half of this work will soon be unveiled.