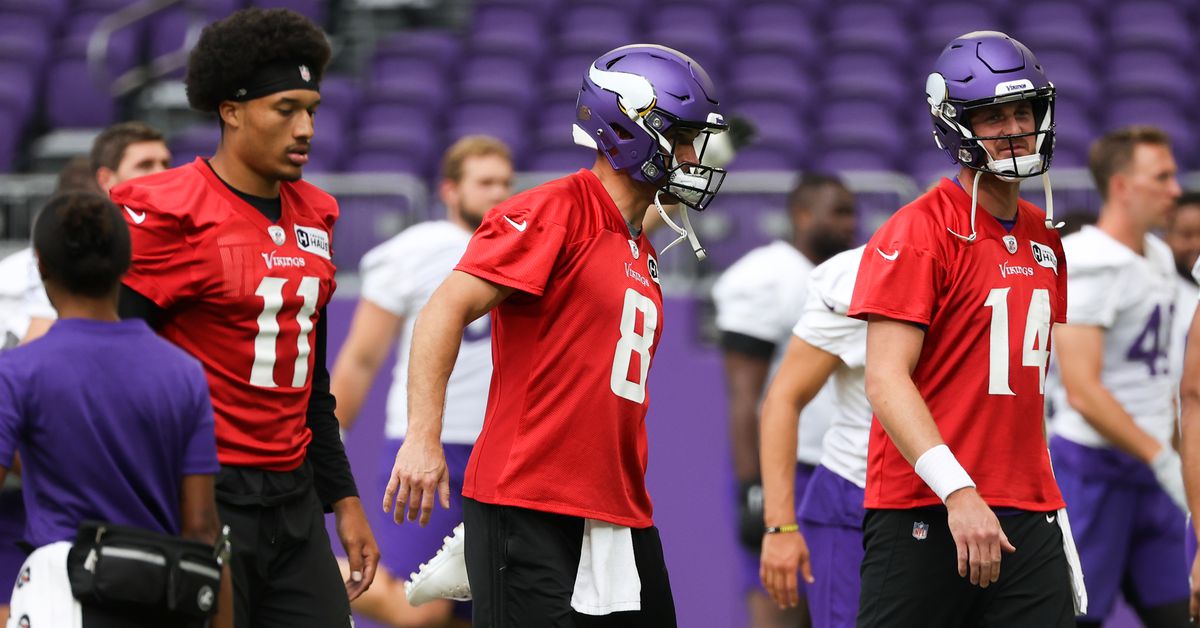 Training camp is officially in full swing for your Minnesota Vikings, and there have been plenty of stories to watch as practice begins. The team is off today (Sunday) and putting the pads on for the first time on Monday, so now seems like a great time to take a look at some of the more interesting battles to watch as they unfold. . go ahead in Eagan.

These aren’t in any particular order and are just one man’s take on the more interesting battles. Your mileage, as always, may vary.

The only starting spot on offense that’s up for grabs is definitely one to watch, especially since it’s been a bit of a black hole for the team for the past two years. Oli Udoh, who started last year at right guard, is reportedly absent as he ran with the 2 at right tackle early in camp.

That leaves things to be settled between a few veterans and the team’s second-round pick. Davis clearly has the advantage in terms of experience, having started 72 games over the past two seasons for the Miami Dolphins. He split time between guard and tackle but was better at guard. So far, Davis has gotten the majority of the run with the first unit, but has also struggled with a leg issue.

Reed, Adam Thielen’s teammate at Minnesota State, has started 20 games over the past two seasons, including 14 with the Carolina Panthers in 2020 and six for the Indianapolis Colts Last year. He got the first-team snaps that Davis hasn’t gone to so far.

Ingram was one of the team’s second-round picks last April, but has yet to crack the roster with the 1s. Honestly, it’s probably only a matter of time before that happens, but we’ll keep an eye on it. I would expect Ingram to win this job at the end of time camp, but he’s not there yet.

Mond had a lost rookie season, appearing for just three snaps when Mannion was injured against Green Bay in Week 17 and had to sit out one series. Mannion is one of those guys who is “good at the whiteboard”, which would be nice if the Vikings had someone like Mond at the High of their quarterback depth chart. But they don’t.

I think the Vikings need to find a way to do more with Mond and give him every chance to move up to second in the depth chart. They can keep Mannion, of course, but if anything happens to Kirk Cousins, it would be Mond who could give them a chance to win some football games. The team needs to see if they have something in Mond for the long term.

Nwangwu’s place on the roster is set in stone for his returning abilities, but I don’t know if many people see Mattison as potentially in danger. I don’t know if he is, but I think Chandler is definitely talented enough to give him a run for the races as Dalvin Cook’s backup (and possibly starter when Cook faces injury).

It may not be a battle that’s on many radars right now, but with Cook set to hit a $14 million cap next season, this could be his last year in Minnesota. Mattison has had his moments as a substitute for Cook and the team needs to find a way to involve Nwangwu’s speed more in attack, but I just have a really good feeling about Chandler, to be honest. He has all the tools to be a productive NFL back and in today’s NFL, where running back isn’t exactly a favored position, the Vikings might see him as Cook’s successor.

I don’t think it’s really a “battle” as I think Vikings are going to use both Cine and Bynum a lot. After all, the Vikings didn’t use their first-round pick on Cine to bench him, but Bynum had a really solid rookie season for the team. This could lead to the Vikings using more three-tier looks to bring Bynum and Cine onto the field with Harrison Smith.

So it’s not really a battle to see who the starter will be, although I think Cine will eventually be listed as Smith’s main running mate. It’s more of a look at How? ‘Or’ What both will be used and what Ed Donatell wants to do with them in the team’s new defense. I want to see what these three security looks will bring to the table, so it’s definitely worth keeping an eye on.

Dantzler has received quite a bit of hype from different outlets this pre-season, but Booth has come on strong in early training camp practices so far. Like Cine, the Vikings didn’t draft Booth to wear a baseball cap, but Dantzler has provided relatively solid play when he could over the past two seasons.

I don’t know if any of these guys are at the point where they’re still going to take pictures of Peterson, but Peterson did struggled with injuries last season and is, again, only at Minnesota on a one-year contract this season. It will be interesting to see how the Vikings balance the workload of the two youngsters during camp and in pre-season games to prepare them for Week 1.

These are the battles I watch, folks. What are some of the camp battles you will be watching?