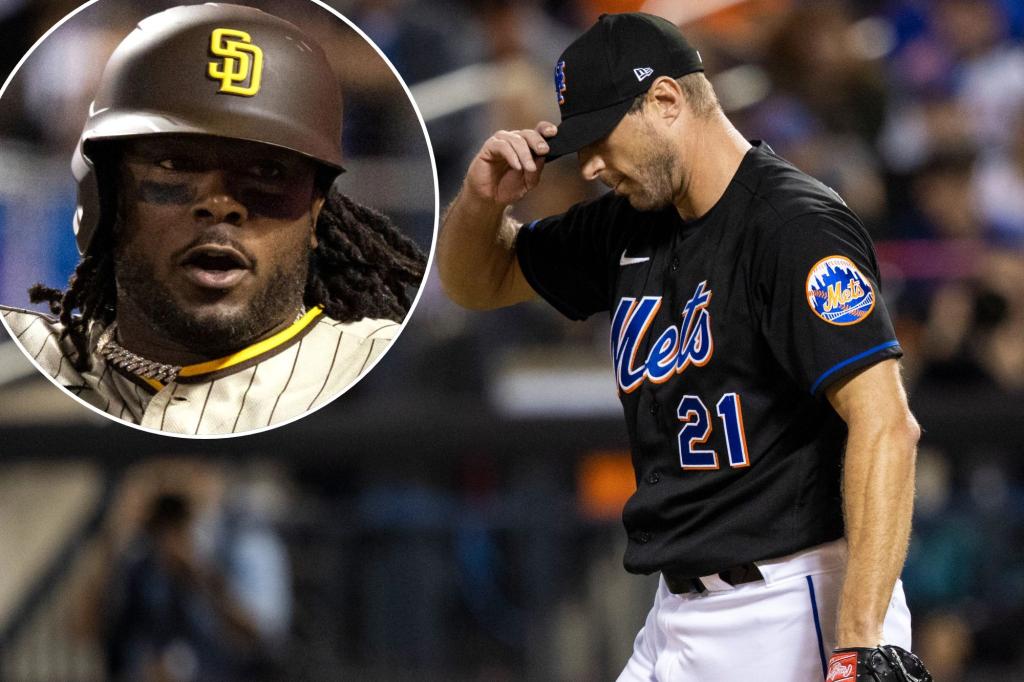 The Mets didn’t play like a 101-win team in stinker vs. Padres

The crowd was ready for playoff baseball. The Mets didn’t seem ready.

“Let’s Go Mets”, chants sounded before the presentations. There’s nothing better than playoff baseball in New York, even a preliminary wild card, and the ever-hopeful Mets fans were clearly ready to rock. But the home side failed to answer the call in a 7-1 loss to the Padres in Game 1.

The thrill lasted until Max Scherzer’s former Nationals teammate Josh Bell hit a meaty pitch as the fourth hitter of the game, drilling one in the opposite direction over the field wall left for a two-point lead, an early omen for a nasty night.

Things didn’t get better from there. The Mets put a few guys on base in the first two innings against Padres ace and Mets killer Yu Darvish, and seemingly stole at will (as Joel Sherman predicted), but that old bugaboo came back. in their game. Like previous Mets teams, they couldn’t deliver an RBI hit, or even a productive out when needed, not that it’s easy against perhaps the only shrewd right-hander in the game (he has knocked out Luis Guillorme on a 67mph curveball).

In the first two innings, the Mets moved a runner to third with just one out, only for Pete Alonso and Eduardo Escobar to sense when only a fly ball was needed. Alonso, in his first two at-bats, took a called strike right in the middle, then on another strikeout he accidentally threw his bat about 150 feet into the net on the third base side.

Both times the NL RBI king made it to the dugout shaking his head. It was too early to break the wood on his knee, but we know he can.

As a unit, the Mets looked a lot like the Mets of the past two years, before they made so many improvements. In round four, naturally, the cheers turned to boos. The Mets use music to enhance the show as well as any team, but at that time the Mets had a DJ playing Queen’s “We are the Champions” playing on the big screen. It seemed premature.

And just like that, the Mets, winners of 101 regular-season games, are one game away from elimination at the hands of the Padres, one of five teams to never win a World Series in their current location. Don’t hit them, though.

No one tries harder than the Padres, perhaps the only baseball team that spends more than its revenue (not counting the Marlins, which have no revenue). The Padres have spent $232 million, the sixth-largest in baseball, and traded half of the top dogs in their ultra-wealthy farm system to try to reverse their long history of frustration — more frustrating than our local nine.

So give them credit. Today, the midrange team boasts four superstars, including Darvish, a playoff veteran and streaking ace that held the Mets down. Darvish is a fantastic pitcher with an incredible arsenal. But the Mets caught him a year too early. Next season, once the 15-second pitch clock is set, he will have a real challenge.

This game was billed as a clash of aces, but only one of them managed to form. Like the team, Scherzer has been exceptional in the regular season. But the money pitcher brought for such an occasion seemed a little too expensive that day. I’m not sure about you, but I was imagining a record $43.33 million flushed down the toilet around the time Manny Machado rocketed a home run into left field to make it 7 -zip. This shot was timed at 110.5 mph. It seems faster.

Scherzer, the highest earning player in baseball history, was completely burned out. Machado’s home run for the Padres’ fourth of the game in 4 ²/₃ innings against Scherzer, who can still feel the effects of the slant strain that cost him, starts early. He hasn’t admitted it, but is said to have trouble throwing his patented cutter.

Late in round five, when Trevor May knocked out Bell, the boos increased. Mets fans were calculating, of course, that they shouldn’t even have been in that position, and wouldn’t have been had they just won a game against the Cubs at Citi Field last month, or a in Atlanta on a lost weekend that felt like the low point of a great season.

Until Friday night, that is. The Mets’ first playoff game in six years represented one of their worst performances of a generally excellent season.

Their little ball was no match for the Padres, who kept hammering. After the Bell homer came a solo shot from Trent Grisham in the second that made it 3-0 and a three-run homer lined up in the corner of left field by point guard Jurickson Profar, the dagger at 6- 0.

It’s unclear why Scherzer was allowed to continue at that point, but two batters later, Machado homered — a left-hand understudy who kept coming and going. One more night like this, and the Mets will go, go too.