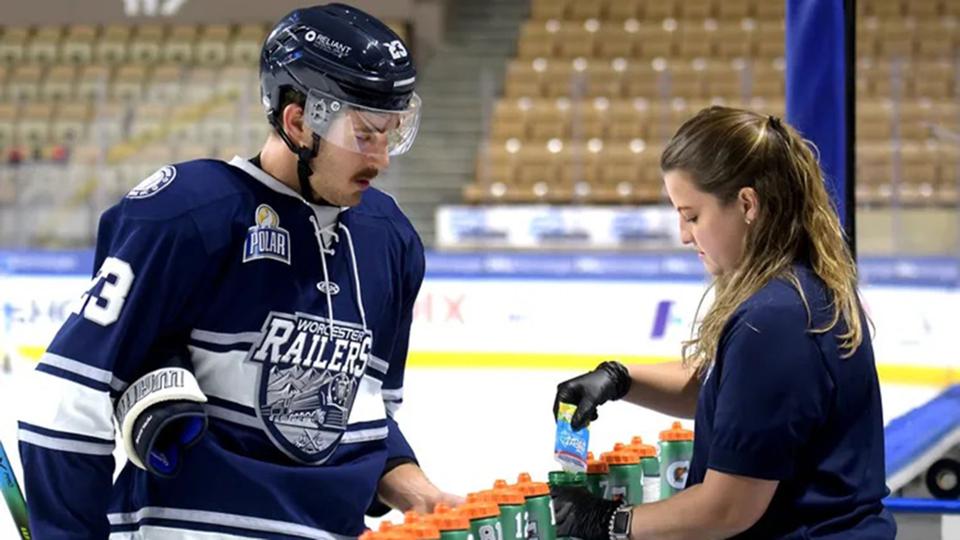 Julia Snow has been named assistant athletic coach for the Springfield Thunderbirds — the American Hockey League affiliate of the St. Louis Blues — making her the third woman hired to work as an athletic coach in the AHL.

“(She) was a big help to us in Springfield last season because we got almost all of our calls (from players) from Worcester,” Thunderbirds head coach Koryd Lavimoniere said. “She is so passionate and thorough in her work that she really stood out during this hiring process.”

“I definitely have faith in their process which I’ve seen firsthand,” Snow told stlouisblues.com of his work with Thunderbirds hockey staff. “They were so easy to work with – I was never afraid of doing anything wrong and I was never too stressed working with them. They had the utmost confidence in me… When (Lavimoniere) told me contacted for this work, I was all the more honored.

Over the year, Snow developed a close working relationship with the Thunderbirds. One of the players Snow worked with was the goalkeeper Colten Ellis, drafted by the Blues in the 2019 NHL Entry Draft. The 21-year-old keeper played 40 games last season between the two teams – 34 for Worcester and six for Springfield. In addition to his physical health, Snow helped Ellis adjust mentally to a full-time professional hockey lifestyle.

Snow rises to the challenge of the faster pace, harder shots and higher intensity that will come at the pro level. Being able to withstand physicality while staying focused day in and day out is a big part of what got her into hockey.

“One of the reasons I fell in love with hockey was the ability to incorporate that mental component into the game – making sure every shift was a fresh slate,” she said. “(I want to make sure) that (players) don’t dwell on things they’ve done wrong and can move on and show up the next day. Their ability to do that is insane for me.

Last season, two women debuted as coaching staff behind the bench for NHL regular-season games after being recalled from their AHL roles. Aisha Visram, called up as head coach of the Los Angeles Kings; and Kedryn Orrison Pilgrim, called up as a staffer for the Buffalo Sabers, became only the second and third women to work behind the bench as coaches at the NHL level.

“It’s something I’m going to celebrate all the time,” Snow said. “The fact that these women, their hard work and perseverance are finally being recognized nationally is huge. Hopefully we can get more, where it’s no surprise to see women behind the bench and in the gyms.

With a wide range of experience and entering a championship-level organization in Springfield, Snow is eager to leave her mark on the Thunderbirds and continue to build her career.