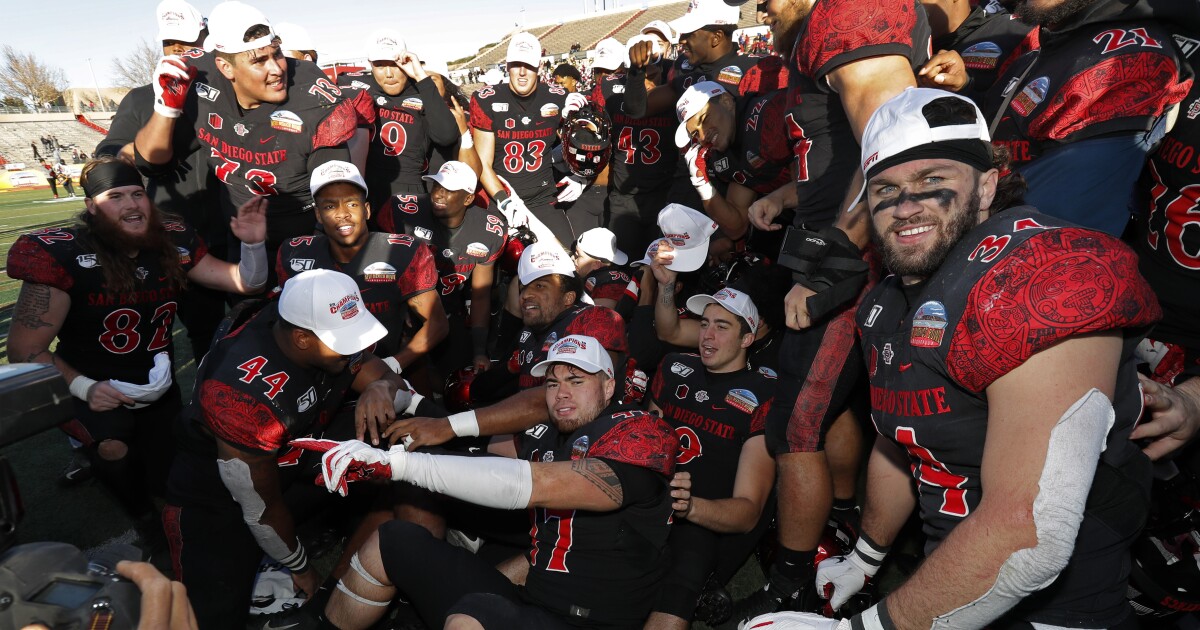 When San Diego State University’s athletic department asked Brenda Tracy to lecture on sexual assault last fall, she didn’t know the extent of the allegations against three then-members of the school football team.

Tracy was brought in shortly after the program learned that a teenage girl had reported being raped by multiple players. Tracy said it’s common for schools to bring her in after an incident and not think about it.

It wasn’t until a lawsuit filed last week against three players that she got the full details. It struck her as it felt like her own rape over two decades earlier.

According to the civil complaint filed in San Diego Superior Court, the then 17-year-old, identified only as Jane Doe, was taken to the back room of a Rockford Drive home and repeatedly assaulted by three men. The prosecution identified them as Matt Araiza, Zavier Leonard and Nowlin “Pa’a” Ewaliko.

Araiza was drafted by the Buffalo Bills last April but was released by the team two days after the lawsuit was filed. Ewaliko left the Aztecs at the end of last school year and Leonard was cut by the Aztecs last weekend. None have been charged with a crime. The public prosecutor is still examining the file.

In 1998, Tracy was raped by members of the Oregon State University football team.

Since 2016, she has been lecturing on college campuses about sexual violence and how athletes can stop it.

“You know, there’s not much I can do. I’m one person,” Tracy said. “And when I leave a campus, I obviously call people to action, and I tell them how I’ve been affected by my own story. And then what they do with that information, and then how they do their own work is their choice and their decision.”

“We have all the programming around sexual assault prevention, righteousness, training, party etiquette,” he said. “We also do leadership training, we do financial planning, all that kind of stuff.”

“We have a program that we follow and it’s, ‘what is consent?’ and role-playing, discussions – in small groups, so hopefully the athletes will have the opportunity to really dive deep to really reflect on past situations,” said Verna Griffin-Tabor, CEO of CCS.

She said the training includes breaking down power dynamics as well as bystander intervention so that when things go wrong, athletes have the tools to speak up.

“If you can’t step in safely, how do you access help and not put yourself in harm’s way, and the other part is, if you find out something later where someone has been hurt or needs help. ‘Help, then, what do you do,’ she said.

Coaching with the CCS was brought to SDSU by baseball coach Mark Martinez. He was first exposed in training when CCS did a session with his son’s Little League team.

“It was obvious to the parents, and then it was very telling for our young guys,” he said. “They’re not exposed to that kind of stuff at that age. And that’s when I thought, well, we’ve got to do something, we’ve got to find a way to start educating our guys who are currently on campus on domestic violence and date rape and that sort of thing.”

CCS agreed to do the training on one condition. “We went in and talked to him and told him we wouldn’t coach the team unless we could coach you,” Griffin-Tabor said. “And he absolutely said we would.”

She said it was important for coaches to be part of the conversation so they can be part of the solution. After practice, Martinez said he noticed a difference in his players. They have more empathy and are more compassionate.

“And it’s not just about relationships outside of the ballpark,” he said. “It’s also in the clubhouse and understanding how to communicate properly with people.”

Martinez said it was a win for the baseball program and that “locker room talk” was silenced by the players who went through the practice.

“Whether it’s a comment or a defamatory statement, those things get quieted down pretty quickly in our locker rooms because they’ve gone through this training,” he said. “They understand that some of these buzzwords might trigger someone.”

Because the coaches aren’t around the players all the time, he hopes the training will give his players the tools to fix the problem right now.

Yet despite training, three former San Diego State football players are accused of raping a teenage girl. Wicker became emotional when asked about it at Monday’s press conference.

“Again, one of our pillars is to create great human beings,” he said before pausing for a long time to fight off the emotion. “And it’s difficult when the training you provide may not have been enough.”

For her part, Tracy said all she could do was tell them how her sexual assault affected her.

“But they also sometimes have to live with the consequences of those decisions,” she said.