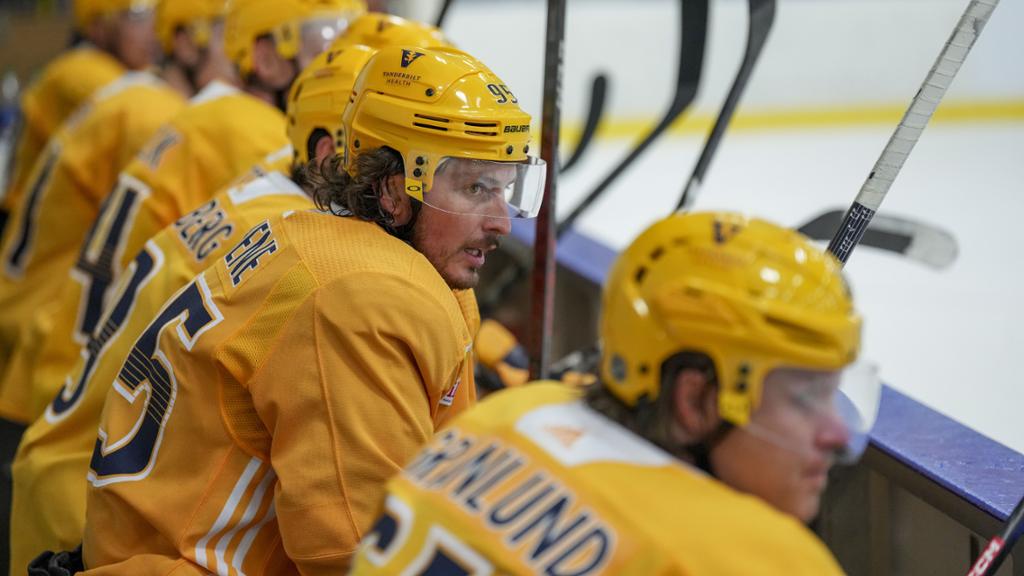 Here are some of the best quotes of the day from Preds players and head coach John Hynes on off-season activities, building a team identity and more.

At the start of training camp

Romain Josi: It doesn’t matter how many training camps you have; it’s always exciting to be back for the first day. Practices are good. They are fast. Everyone is excited. Everyone is motivated, so it’s a lot of fun.

Matt Duchene: Today is one of the best days of the year, ever. It’s so much fun hanging out with the boys and it’s hard work, but we welcome it. … We said every day, ‘Damn, I can’t wait to be at training camp.’ So it’s always a great feeling and a good thing when your whole team feels that way.

Philippe Forsberg: Camp is just about getting your legs back, getting that hockey back. I mean, those are obviously situations that you can’t really practice in the summer with guys around you and fights and stuff like that that you recover pretty quickly here at camp, and I think that’s in sort of where you have to start and then get the chemistry kind of going.

Nino Niederreiter: There are a lot of things to take in. There are a lot of new faces, a new structure and all those things, so you have to focus really hard and try to do the right thing from the start and fight hard to compete. … It’s not always easy to integrate a new team and learn a new structure, but it just takes a little time. You don’t have to do everything perfectly on day one, and I think that’s something you just have to be smart about. But at the same time, you want to make sure you adapt to the system as quickly as possible and feel comfortable around the guys.

Hynes: We spoke with the guys yesterday in the opening meeting about trying to take advantage of every day because obviously it’s a bit shorter camp with the Global Series games. So we try to enjoy every day. And you know, I really liked that a lot of our veteran basemen, very similar to last year, just driving the intensity, driving the execution. I think all three groups trained well. We really liked the scrums, it’s something we talked about with the guys. We wanted to have a lot of pace and then strong competitiveness and maybe not huge hits, but really competitive on the puck and getting ready for the game. So kudos to the guys. I thought it was a good day.

On the off-season addition of Ryan McDonagh

Jose: He’s such an amazing player. And of course, what he has accomplished speaks for itself with the last two Stanley Cups and the Finals. He’s just a really tough player to play against [with] lots of experience. Amazing guy. I’ve been able to spend time with him for the past two weeks, and he’s a great leader – obviously he was also a captain.

Duchene: I even said last year that his guy was maybe the hardest guy to face in the league… So it’s so good to have him on our side.

Hynes: To have a guy like Ryan was really special and something that we jumped at the chance to do because, you know, I think when you watch him on the ice and how he plays the game, he was able to win . He plays a key role. He plays a difficult role, but he just plays the game the right way. Very consistent in what he does. And I think the way he plays brings a team together because he plays in the tough areas all the time. But even just talking to him, spending time with him, just his presence – being a former captain, having won two cups, coming from Tampa as captain of the Rangers. You know, he’s a really nice guy, but there’s a maturity to our bedroom presence. He is completely professional at the right time, and I think he will be great for our young players. … I know there’s a ton of respect for him. So he’s going to be a very valuable piece on and off the ice for us.

On the off-season addition of Nino Niederreiter

Jose: He is a difficult player to face. We’ve played against him a lot in the last two years, and he plays physically. He can score a lot of goals, he’s really good with the puck and he’s tough around the net. He gets pucks in the corners, he goes to the net, he gets those ugly goals. An amazing guy too. I have known him for so long and we are very good friends.

Duchene: Nino has been an incredible player his whole career. Just a good two way guy, heavy, hard to face, physical and able to score.

On rookies at boot camp

Hynes: The rookies have been pretty impressive since returning this year. In the first practices before going to Carolina, you could tell the team looked like a different team than last year – just more mature. The practices were very good, they were clean, they were competitive. And then they looked good in rookie camp and now they came in today and you know like we’ve been telling the players we feel like we’ve worked really hard this offseason to try to bringing in players, whether it was free agents, whether it was invitations, draft picks, trades, having anyone was to be able to give us strong depth. And we feel like we have really good depth in our whole group, whether they’re here or whether they’re in Milwaukee, so I think they did a good job on day one.

On building a team identity and fighting for the Stanley Cup

Hynes: We want to be a tough team to face and an even tougher team to beat. So I think when you do that you want to make sure we play fast. We want to be very competitive with the puck. We want to be able to play with structure and when we don’t have the puck that the guys are committed to being able to check in the right direction. And then I think that in everything, the sport is difficult so you want to have mental and physical strength.

Jose: There’s a lot of trust in our room. I think the season obviously didn’t end the way we wanted, and I think we looked in the mirror well at what it takes to win in this league… We took a big step in the right direction.

Forsberg: It’s day one – we can’t take any of our successes from the past year for granted. A lot of guys have had career years and that’s great, but we have to start over. Obviously the guys we bring in will have to do the same. They’ve proven themselves so I’m not necessarily worried about their perspective, but at the same time our strength has always worked and I think that’s kind of where we need to start. We’re going to have to work in camp, and we’re definitely a better team than a year ago.

McDonagh: I think the most important thing with this band is that you don’t try too hard to think big. We have a great mix of experienced veterans, older guys who have played in the league for a while, and a great mix of younger guys who are still hungry and trying to establish themselves. So we’re going to take it one day at a time, one practice or one game at a time, and I think that’s going to be our mentality going forward. …There is no greater feeling [than winning a Stanley Cup]. It’s hard to describe. And as soon as you get a taste of it, you’ll definitely want to repeat that and go through the process and go through this journey with the bunch of guys and feel that reward at the end of all that hard work. So, as I said, we’re building our identity here at the start of the season, the way we want to play, what’s expected of us every day, and we have a great coaching staff that will develop a plan and put the guys in a position to succeed.

Duchene: We have all the pieces here on paper. But the game is not played on paper. So we have to make sure that the guys who had good seasons last year have to do the same thing again. And then these new guys, they come in and do their thing, which will just add up. We love our team. We’re confident and I think we’re going under the radar a bit, which is a good place to be. Our day-to-day is about managing expectations, and you can’t win the Stanley Cup in November. You can’t win it in October. You can’t even win it in April. So you have to make sure that we just set short term goals and achieve them as we go along.