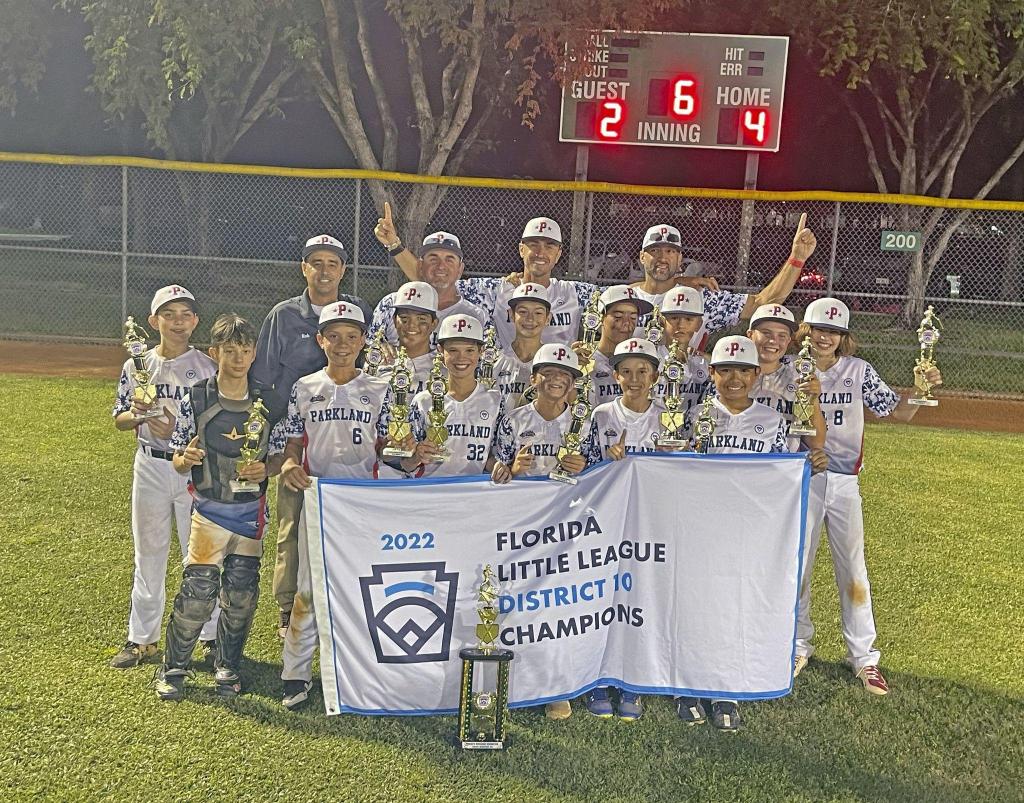 Parkland 12-Under Little League All-Star Manager Derek Anderson was proud of everything this year’s team was able to accomplish.

To reach the state tournament, Parkland swept Liberty City, 3-0, 5-2. Anderson said a combination of things in the state, including being overwhelmed and struggling defensively, led to three losses to Tampa Keystone, Maitland and Tallahassee Chairs.

“The state tournament in St. Pete was a great experience,” Anderson said. “The trip was special. Unfortunately, we didn’t get the screening we were hoping for. We give a lot of credit to the other seven very talented teams that qualified for the state tournament this year.

Anderson, who started in the Tampa Bay Rays organization, said he told players at the start of the season there were hundreds of teams with thousands of kids playing Little League in Florida.

“At the state tournament, there were only eight teams and about 100 kids left standing,” Anderson said. “We were one of the lucky few to have the opportunity to say that we came to the United States two years in a row. I said to the boys… we are proud of you!

Jacob Hayes, Eric Tollefsen and Nick Salerno were stellar on the mound. Heading into the state tournament, in 30 baseball tournament innings, Parkland’s pitching staff struck out 48 and allowed only three earned runs.

Hayes also paced the offense, batting .500, while Jovanni DeFalco also performed well at home plate, including his first-ever homer over the fence.

In addition to Anderson, the team was coached by Guido DeFalco and Matt Clary.

“As a coaching staff,” said Anderson, “we feel very fortunate to have had the opportunity to coach this talented group of young gentlemen. We are honored to be the only team in Parkland Little League history to qualify for the State Tournament two years in a row. It’s something our kids can cling to forever – they’ll tell their kids about this Little League experience long after I’m gone – I’m sure!

Anderson also cited the support he received from parents and the community. The city also hosted the district and section tournaments.

“We had a group of enthusiastic athletes who wanted to elevate their baseball skills,” Anderson said. “Most of the kids showed up about 20-30 minutes early for each practice.

“Each of our 25+ practices had a very detailed process,” Anderson continued. “I basically walked them through my old spring training routines. We are very intentional in everything we do…the boys understand that in order for us to achieve our noble goals, it is essential for us to have a process.

The “physical” part of working with the players has been supplemented by the inclusion of the “mental aspect” according to Anderson.

“From the moment we step onto this pitch, until the moment we leave, we work with purpose and reason in everything we do,” Anderson said. “We train their minds on the mental aspects of baseball almost as much as we teach them the physical. I’m very proud of how hard they’ve worked to elevate all aspects of their game. They’ve learned a lot and they’re definitely being rewarded for their hard work.

Gary Curreri is a correspondent for South Florida Community News.