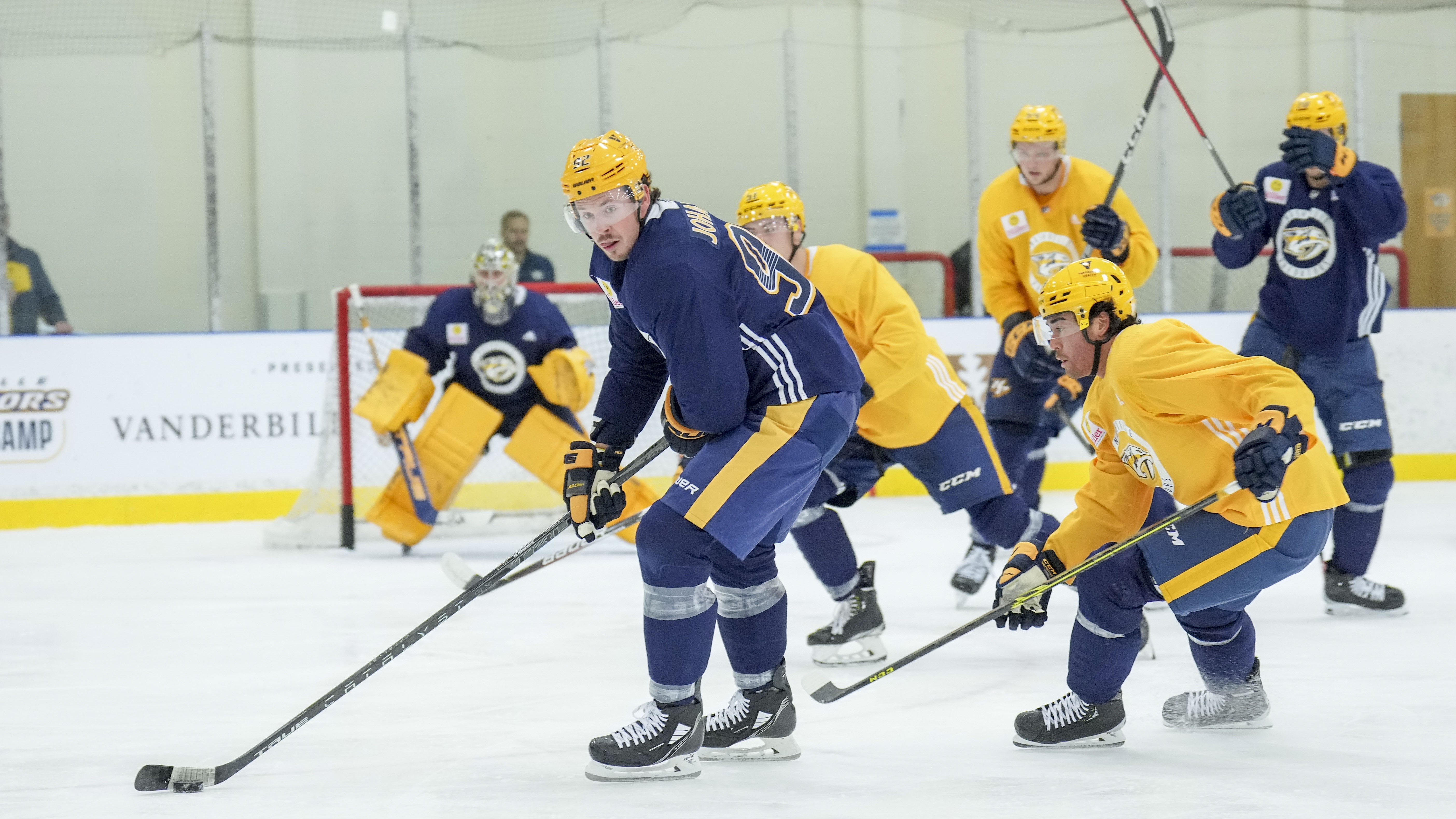 Nashville Predators training camp presented by Vanderbilt Health continued Saturday with a full morning of practices and scrimmage at Centennial Sportsplex. Hear from the players themselves as they discuss some of Camp’s biggest storylines, from position battles to roster reshuffles and more.

Head coach John Hynes called up defender Mattias Ekholm personally over the summer when he learned the Preds could trade for the two-time Stanley Cup champion Ryan McDonagh to further his thoughts on whether he would be comfortable playing on his side if the two were to play together on a pair. Ekholm’s reaction?

“If we can have a player like McDonagh in our squad, absolutely.”

Ekholm and McDonagh have been training together during training camp with Ekholm on the right side, and the feedback has been positive so far.

“I think we’re kind of the same,” Ekholm said. “It’s not the same player, but we tend to want to play the same way and to be responsible. So I think it’s a very good match… I hope we can both help each other to develop our game both offensively and defensively and build chemistry. . That’s pretty much what we need to do to go there because I know he can contribute offensively as well. So hopefully we can all the two of us nurturing each other.”

While Ekholm has spent the previous two seasons mentoring and anchoring pairs with younger, less experienced defenders, he relishes the opportunity to play against another accomplished veteran – even if he is on his side.

“[McDonagh] is a stable veteran,” Ekholm said. “Just really good defensive reads and the way he positions himself as a good skater, hard for forwards to follow. So for me on the other side with him, it’s been a pleasure to play with him so far. I think his track record speaks for itself. So that’s all I expected.”

Reunited and it feels so good

When the Predators signed a free winger Nino Niederreiter over the summer, few people were more excited than Ryan Johansen.

The two are close friends, having played junior hockey together over a decade ago with the Portland Winterhawks of the WHL. Johansen was selected fourth overall in the 2010 NHL Draft by the Columbus Blue Jackets, while Niederreiter followed fifth overall ahead of the New York Islanders.

“That’s so cool,” Johansen said with a smile. “You know, it’s so weird to see [Niederreiter] every day because we were best friends when we were 17 and 18. Then we lost touch throughout the NHL; we used to see each other here and there but don’t really spend time together, and now we hang out [together] all day again. It’s funny seeing him every morning – we both laugh every time we see each other. But it was great fun. I like this guy. And he’s going to fit in really well.”

When asked what Niederreiter brings to the Predators on and off the ice, Johansen praised his potential top-six teammate.

“He’s an established player,” Johansen said. “He’s a great power forward who goes hard and scores goals. He’s a reliable, trustworthy and tough player and a guy every team wants in their squad… [He] fits very well in the room. Awesome guy. And so it’s been fun.”

Competition in the fold

Nashville’s goaltending depth was a frequent talking point before training camp, especially with the Preds’ inking Kevin Lankinen to a one-year contract in July. While Lankinen was presumably signed to fill the main backup role behind starter Juuse Saroshe knows he won’t be given that role unless he deserves it.

“As a goaltender – especially an NHL goaltender – there’s always pressure on you,” Lankinen said Saturday. “Every new day, every new season, every game, you have to prove yourself again. So this camp is nothing new. You come to camp and you have to earn your place in a team, that’s for sure.”

Of course, the fact that former Predators goaltender – and fellow Finn – Pekka Rinne joined the organization as a special alumni advisor at the start of training camp was also a treat for Lankinen.

“That’s pretty cool,” Lankinen said with a smile. “You see how much the guys respect him. I’m just getting to know him a bit. So I have a lot of respect for him too. He was one of my idols growing up at my house in Finland. I watched a lot of play – I used to watch the Preds when he was there. He was such a good idol and mentor not only to me, but also to a lot of young goalkeepers in Finland and all over the world.”

The Predators will practice and play again on Sunday before opening the preseason with a doubleheader against the Florida Panthers on Monday at Bridgestone Arena. Free tickets for Monday’s matches are available here. Click on here to see the full list of training camps and click here for the full training camp schedule.