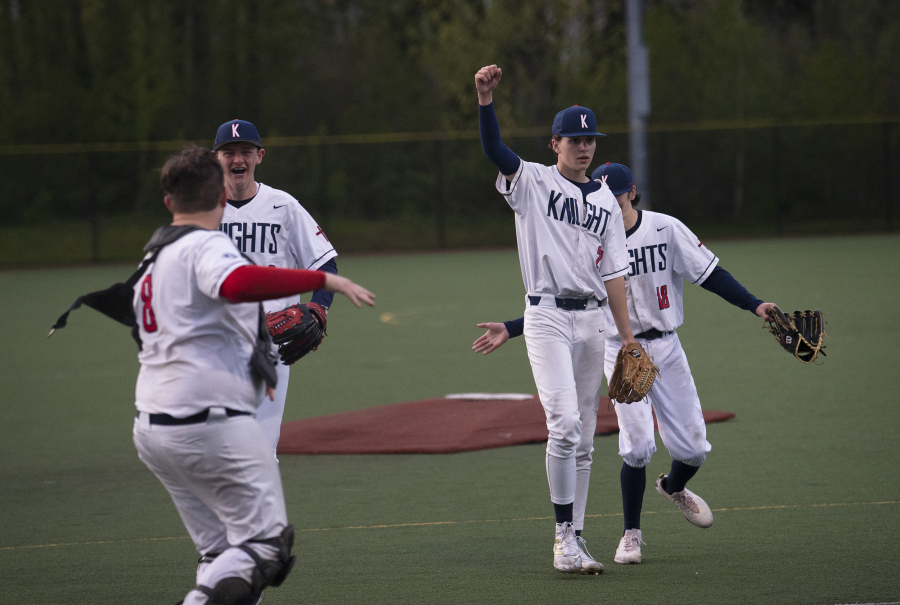 Todd Pisarczyk recently came across a quote that was reminiscent of his King’s Way Christian baseball team.

Based on that idea, King’s Way head coach Pisarczyk believes the Knights have what it takes to be a great team.

“Even stuff like if a guy doesn’t run hard to first base, he’s in (the dugout) holding himself accountable. Coaches don’t have to,” Pisarczyk said. “I think that’s what he does. It’s not us; it comes from within. It’s not the coaches who have to say, ‘Hey, you have to do this or that.’ »

King’s Way has been prone to slow starts a few times this season, much like Tuesday’s Trico League doubleheader against La Center when the Wildcats took an early 2-0 lead in the top of the first inning.

The Knights have shown a consistent knack for overcoming tough times to pick up wins. Much of their resilience can be attributed to how well they handle responsibility.

“There’s no one with an ego and everyone is ready to learn and play their best. I think it’s really easy for us to come together and just play ball,” the junior said. Isaac Pisarczyk.

Second-year pitcher Makani Geisen added, “There’s definitely a family aspect to being close and being able to…support each other and be honest with each other.”

A common thread in the Trico League this season is the youth of each team. Interestingly, the most successful teams at this stage are also among the youngest.

King’s Way graduated seven seniors last season, including six starters. More than half of La Center’s roster is made up of underclassmen, and the Wildcats have new starters at all nine positions. Seton Catholic started the season with 10 freshmen on their varsity team.

The current league leaders froze pretty quickly. The Knights are led by their junior class of captains Marcus Whitney, Isaac Pisarczyk and Andrew Peru, but countless others have stepped up as needed.

On Tuesday, they put the ball back in the hands of freshmen Derek Tarnoski and Geisen, and both have handled the pressure of the team’s most crucial games so far.

Geisen, who pitched a team-record 40 innings with a .52 ERA and 69 strikeouts, transferred this year to King’s Way Christian Schools at River HomeLink in Battle Ground, while playing baseball in Prairie. .

“Any new team, I got to know a few of the guys through the church, so being able to have those relationships and then get into baseball was just a bigger thing, because we can be real with each other at outside and inside,” Geisen said. . “The team chemistry is really (good) because there is no age group of captains; it’s all of us together.

“I’m very committed to player development and I give them a lot of feedback on how they want things to look,” Weiss said. “Honestly our guys have done such a great job of taking everything we throw at them, running with it and making it their own. They really bonded, and I think that’s key with a young team. We won’t have the success we’ve had this year if they don’t buy into it.

The Center and King’s Way were co-league champions in the condensed 2021 spring season, vying for the title again this season and likely for years to come with players still several years old. They will play again on Friday afternoon in their last regular season meeting.

“It was fun to see these guys come together as well,” Todd Pisarczyk said of La Center. “They have a young squad, Seton has a young squad, so it’s going to be a fun and competitive league for the next few years.”