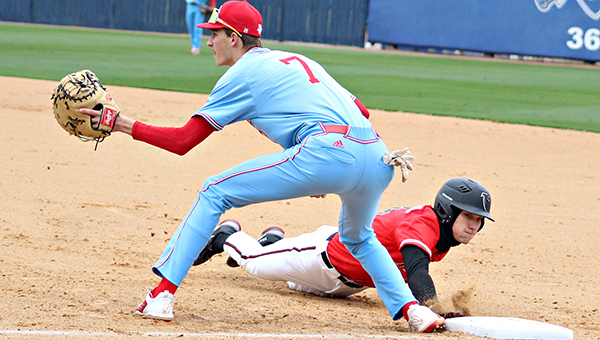 PEARL — During the first two weeks of the high school baseball season, Warren Central was much like late winter weather in Mississippi — hot one day and cold the next.

The Vikings have alternated wins and losses, but haven’t had two in a row in their first five games. They concluded their run at the Mid-Mississippi Classic on Saturday with a 4-2 loss to Flowery Branch (Georgia) which was their second in three games in the tournament.

“Typical Jekyll and Hyde right now. We’re seeing signs, seeing good things that we’re coming to that bend, but we haven’t quite made that bend yet,” Warren Central coach Randy Broome said.

When the Vikings (2-3) were good at the start, they were very good. Among their successes was an impressive 6-1 win over defending MHSAA Class 6A champion Madison Central.

When they’ve been bad, however, they’ve often hurt themselves more than the opponent. They made nine errors and scored only five points in three losses.

Warren Central had five errors, along with a few wild pitches and passed balls, which led to two unearned runs in the loss to Flowery Branch.

Flowery Branch scored a run late in the first inning without hitting a ball out of the infield. Leading man Nick Linkowski was safely on a floor when the throw knocked the first baseman out of the bag. He moved to second on an errant pick pitch, third on a wild pitch and scored on a passed ball.

In the sixth inning, Kade Smallwood reached a loose fly ball and eventually scored to give the Falcons a 4-1 lead.

“Any time you have three more errors on the board, your chances of winning won’t be very good,” Broome said. “In the end, it could have gone the same way as this one, but it might have been a bit closer in the end.”

The Warren Central strike also had its ups and downs early in the season. He scored 13 points in wins over Madison Central and Ocean Springs, but only five in losses.

Floyd Davenport singled and scored on another base hit by Seth Sterling in the top of the first inning against Flowery Branch, but Falcons pitcher Mason Compton struck out 17 of the next 20 batters.

Warren Central’s second inning didn’t come until the seventh inning, when Kylan Landers doubled and scored on a two-out single by pinch hitter Cade Fairley. One runner was sent off on the base paths and another was blocked at third base.

Compton finished with an eighth strikeout. Warren Central batters struck out 50 in the first five games.

“The things that we worked on offensively, we have to go back to our best approach. We hit back, we swing to break balls and take fastballs,” Broome said. “We need to have more balls in play in key situations for us. We did it sometimes, but we didn’t do it very well today.

The Vikings have shown enough promise in their best moments this season that Broome isn’t about to hit the panic button. He noted that most of the teams they faced were quality opponents, so some setbacks come with territory. In addition to Madison Central, West Marion reached the Class 3A Quarterfinals in 2021 and Germantown was a Class 6A playoff team.

“It’s a pretty good schedule up front. It’s I-20 baseball, that’s what I call it,” Broome said with a chuckle. “Our schedule, you’re going to face good competition every time we play. It’s set up that way. Our biggest thing is to start to gain a little more confidence in what we’re doing, and we’re starting to see that in some of our guys.

The Vikings return to work next week, with a few more days to work things out before playing back-to-back home games against Clinton and Tensas Academy on March 4-5. Region 6-6A doesn’t open until March 22 at Pearl.

“I felt good the last three games. I’m excited where we are. All three games we pitched it well enough to win for sure,” Broome said. “We just have to clean up some of the little things. There’s work to be done, but I feel like we’re getting closer to a strong team from top to bottom. We just work to improve by one percent every day.

Why the Astros are auditioning minor league prospects for different positions