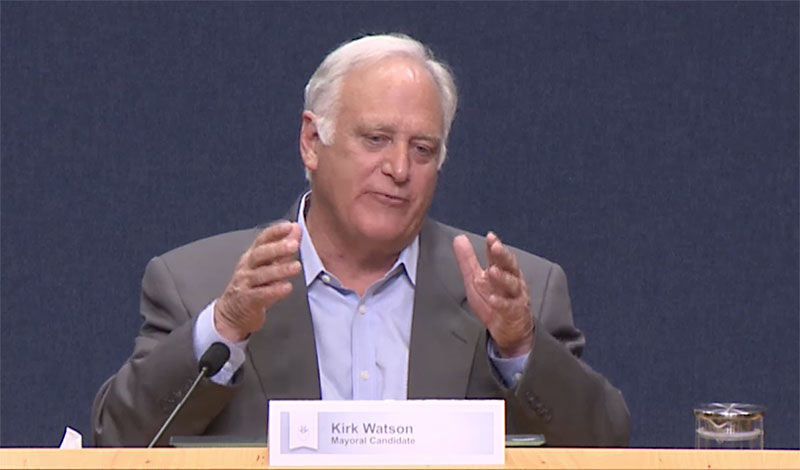 Kirk Watson speaks at the League of Women Voters Candidates Forum October 20 at City Hall. (Screenshot via City of Austin)

Five of Austin’s mayoral candidates had the chance to (briefly) pitch at the Oct. 20 forum sponsored by the city and the League of Women Voters. Here are a few excerpts that stood out to us.

Gary S. Spellman On Homelessness: The Ultimate Face Cosmetics co-founder actually experienced homelessness, which brought her compassion even as a member of the ‘purple party’ (meaning a little red and a bit of blue). “We need to meet the needs of homeless people, we need to treat them with dignity and respect, and we need to give them a clear path to get back on their feet,” Spellman said, adding that people who are homeless should not be “ demonized [because] they’re out of luck.”

Kirk Watson on Austin Water: The former mayor and state senator reminded voters that we have yet to find a replacement for Greg Meszaros, who retired in February. That person, Watson said, must have “a vision for the department” that makes sense as water scarcity increases on a warming planet. But they also need deep management experience so they can “hold people accountable” and make sure “there are layoffs in place” so boil water advisories don’t become the news. standard for Austin Water’s more than one million customers.

Celia Israel on the maintenance of city employees: the representative of the State. agrees that city workers in Austin need to be paid more as the city gets more expensive, but she’s also pointing up. “There is a lack of leadership from the city manager, the mayor and the council,” Israel said. “There are good, decent employees in the city who don’t get the support they need when they have an idea or a creative solution. … We need to make sure they’re heard and respected.”

Jennifer Virden on basic municipal services: The leading Republican found a way to answer nearly every question with a reminder to “fully staff” the Austin Police Department. She said it was an uncontroversial position (probably correctly) of the type she would prefer, avoiding the issues she thinks are controversial, like Project Connect, which was approved by nearly 58% of Austin voters in 2020.

Brutal Phil Campero on consensus: We thought it was Watson’s trademark, but the 21-year-old UT student says he can do it too. “Consensus is easy; most of the world lives between the two parties,” he said, referring to Democrats and Republicans. “Most of this world is ready to walk down the aisle and that’s what I’ve been doing all my life.”

Do you have something to say ? The the Chronicle welcomes opinion pieces on any topic from the community. Submit yours now at austinchronicle.com/opinion.