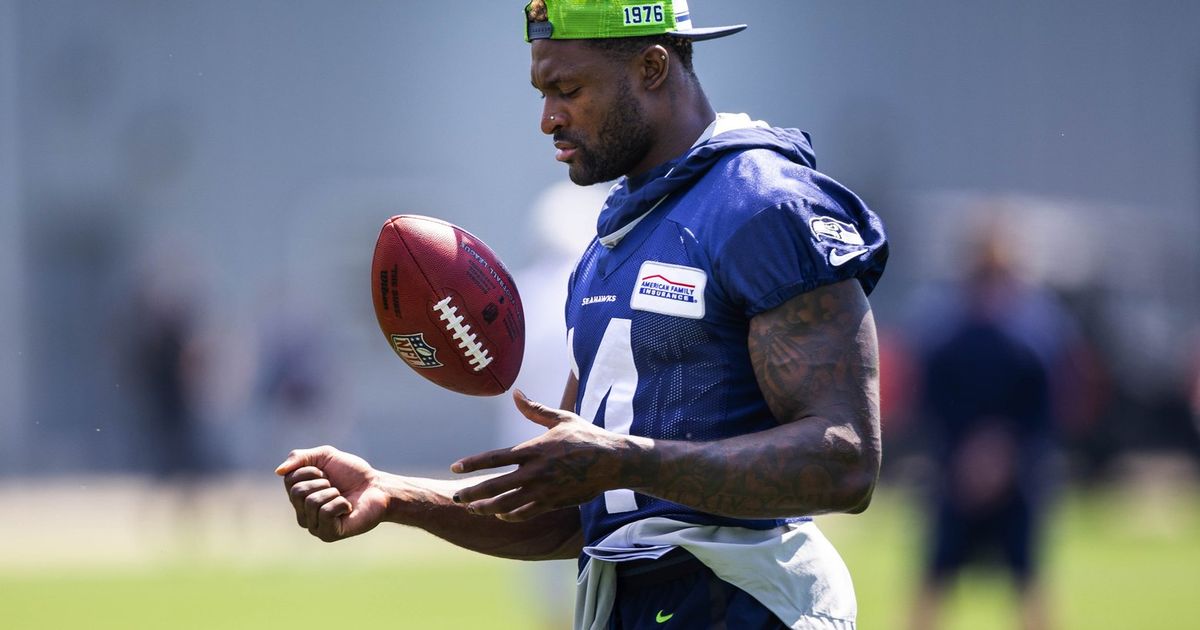 RENTON — DK Metcalf was in attendance for the Seahawks’ first training camp practice of the year.

But he was not active, watching in a baseball cap instead of a helmet as his teammates completed 90 minutes of drills, following the example of teammates in recent years who also had unsettled contract situations.

Metcalf showing up to camp but not participating in drills is becoming an increasingly common tactic for league players, in effect, earning the moniker of “holding on”, instead of showing up and holding on.

And how long will Metcalf last?

Well, to hear coach Pete Carroll say it afterwards might not be too long – but it also seems unclear.

Carroll said, “I don’t have an update for you,” but added that “there’s a lot of work going on like right now.”

Carroll added that the team had hoped a new contract for Metcalf, who is entering the final season of his rookie contract, would have already been agreed.

Carroll also clarified that if Metcalf is signed he will be on the field. Metcalf underwent post-season foot surgery after dealing with a foot problem that emerged after Game 3 of the 2021 season. But Carroll said “he passed his medical. He is fine.”

Metcalf appeared engaged throughout practice, hanging out with receivers during team drills and occasionally popping his head in huddles. And at the end of practice, he left the field to speak with new receivers coach Sanjay Lal, with whom he is particularly close – Lal was also on the Seattle staff in 2019 during Metcalf’s rookie season.

But asked again about the status of the talks, Carroll said, “I don’t have any updates for you.” The team hopes he will soon.

Carroll said the team had known for about a month that running back Chris Carson was unlikely to play this season. The team released Carson on Tuesday with a failed physical designation, and he is expected to retire.

Carroll said he spoke to Carson again on Tuesday and “as he said” I had time to deal with it. I agree now. And so he goes ahead.

Carson underwent cervical fusion surgery last December which the team hoped would allow him to continue playing. The surgery was to fix a lingering neck problem that sidelined him after the fourth game of the season.

But Carroll said that with each “marker” of progress, Carson’s situation did not improve.

“The last time we hit him was about a month ago, and he hadn’t made any progress,” Carroll said.

Carroll said one of the main issues was that Carson didn’t have the necessary range of motion, which caused discomfort.

“He couldn’t quite get over it,” Carroll said. “It was shameful. Throughout the offseason, we talked to Chris all the time. We were all trying to keep a really good idea that maybe this was going to come to fruition and change him. … He worked like crazy to He was going there all the time.

Carson finished his Seattle career as the eighth-leading rusher in franchise history with 3,502 yards.

“I loved it,” Carroll said. “And it breaks my heart that I don’t have it anymore.”

Geno Smith stays ahead of QB race as camp begins

The first practice of camp brought no changes to the quarterback’s depth chart. As was the case during OTAs and minicamp, Geno Smith mostly worked with the first team while Drew Lock was with the second unit and Jacob Eason also got a few shots here and there.

“Geno is in the lead right now,” Carroll said. “He’s up front and he’s not looking back – he’s going. And Drew is not going to fade away so something is going to happen. And Jake will be there if we need him.

Carroll reiterated that Smith is leading for now largely due to his knowledge of the offense.

“Drew had a really, really good offseason with us,” Carroll said. “He’s just behind in learning and so he’s catching up. But he is a really talented footballer.

As for when a decision will be made? Carroll played coy on this, dodging the question, as he did with the rep split, saying “you’ll see.”

But as he has always said for months, Carroll said no decision should be made anytime soon, saying the competition could go on for the entire pre-season.

“We’re going to start adding up the days,” Carroll said.

Here are some quick injury and personnel updates and observations.

206-515-5699 Where bcondotta@seattletimes.com; on Twitter: @bcondotta. Bob Condotta covers the Seahawks for the Seattle Times. He provides daily coverage of the team throughout the year.
Share FacebookTwitterGoogle+ReddItWhatsAppPinterestEmail