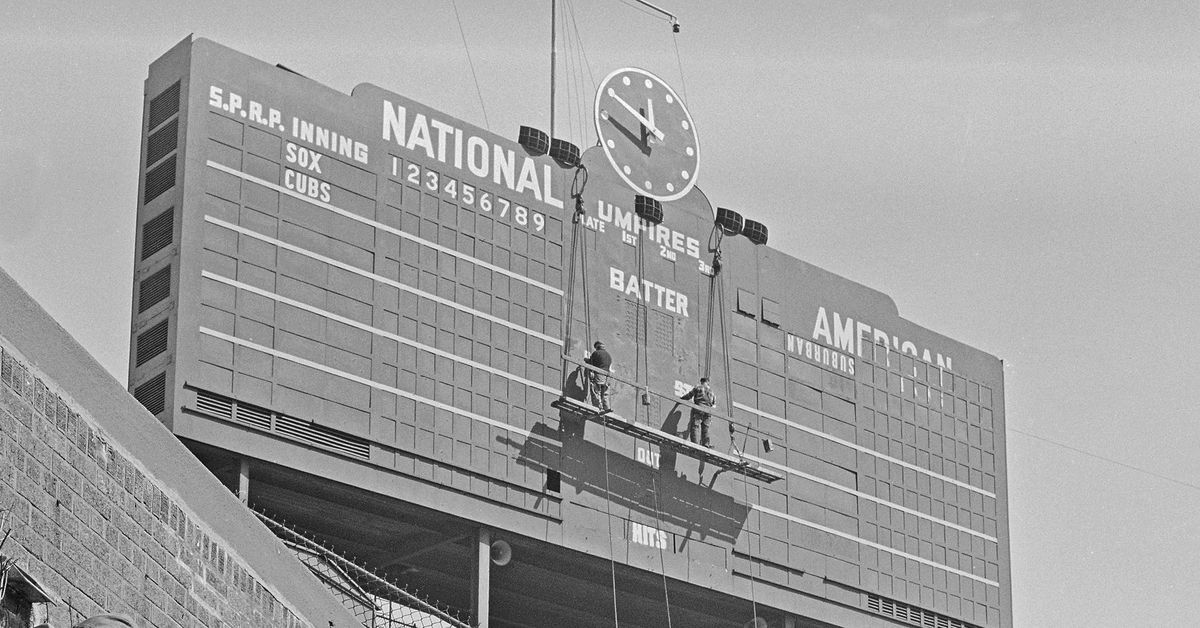 When the ref yells “play ball” to open the 1961 Chicago Cubs season here 4/14. the famous green vines hanging from the outfield fence at Wrigley Field will add their color to the occasion. Here, veteran ground keeper Albert Gargulo carefully trims the green in 4/3 left field, while other workers paint a huge scoreboard (background).

At the top of this photo, I only showed you the dashboard, as that’s what I’m focusing on for this article. At the end of this article, I’ll post the full photo showing the size of the ivy.

What I want to draw your attention to here is the right side of the board, where “AMERICAN” is partially obscured behind a row of neck plates. Why is that?

When the board was originally built, and until 1960, it looked more or less like this (with a few color changes along the way):

This photo was taken on July 23, 1960, as reported in this article here last year. You can see the board set up for 16 teams, as the major leagues had been established for six decades, since the turn of the 20th century.

For the 1961 season, the American League added two teams, the Los Angeles Angels and the Washington Senators, the latter replacing the “old” Senators, who moved to Minnesota and became the Twins for 1961. an extra row needed for scores for five AL matches. The NL wouldn’t match that expansion for another year, when the New York Mets and Houston Colts .45 were added in 1962.

So when this photo was taken on April 3, 1961, the word “NATIONAL” had already been placed at the top of the table, where it resides to this day. But “AMERICAN” hadn’t budged yet. (Where does this backward word “SUBURBAN” come from is lost in the mists of time.)

As you can see in the photo, the field was set for five games on each side, although the NL would not expand for another year. The unused line on the NL side was occupied by the words “NEW YORK HOUSTON 1962”, as shown in this photo from April 29, 1961:

For a larger version of this photo, which shows the painting in more detail, Click here.

So the photo at the top of this post captured a moment in time between the old and the new, as the now iconic Wrigley dashboard was being altered. It was changed again before the 1969 season, when the leagues expanded to 12 teams each. Since then, however, the board has remained in its arrangement of six games on each side. There’s probably no room to add more games, and now that the board is marked, it’s probably not possible to change its format anyway. So when there is a full list of 30 teams and 15 games, three games are not displayed.

Let’s go back for a moment to the photo of April 3, 1961: it shows “SOX CUBS” in the upper left line. The Cubs actually played a preseason exhibition game against the White Sox at Wrigley Field on Saturday, April 8, 1961, in front of “12,956 chilled fans,” the Tribune reported. It was 36 degrees at the time of the match (1h30) and the first time the teams met since 1957.

The Cubs won 4-1 behind a full game performance from Dick Ellsworth, who dispersed 11 hits and struck out four. Don Zimmer went 2 for 4 with two runs scored for the Cubs and Billy Williams, who would ultimately be the NHL’s Rookie of the Year this season, led a pair. None of this helped the Cubs in what would be another miserable losing season. They finished 64-90, the fifth time in eight seasons they’ve had more than 90 losses.

Here is a larger version of the photo at the top of this post from 60 years ago last April, a view that apart from a basket in the front of the bleachers and juniper bushes in the background area batters, is not all that different today: