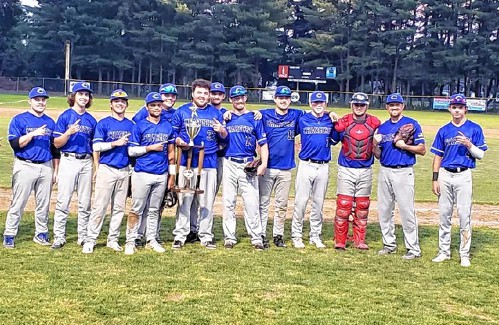 The Concord-based league, “the oldest amateur after-supper baseball league in the nation,” (according to the league’s website) saw four teams face off at Memorial Field and White Park throughout the summer , with Colby-Sawyer finishing top of the standings. regular season standings with an 11-2 record.

Colby-Sawyer beat Century 21, 6-1, 2-1, to sweep the semi-final best-of-three, while Grappone needed all three games to overtake Sanel on the way to the final.

Eight of the 16 players on the Colby-Sawyer roster also play for Colby-Sawyer College baseball during the spring season, including Jake Choiniere, who led the league with a .500 batting average in the regular season, plus a league-high five. added hits (five doubles, one triple), 15 RBIs and 24 hits in 13 games.

Josh Finkle (3-0, 28 strikeouts in 32 innings pitched) led the pitching team in the regular season, while other CSC stars Matt Miller (won two full games on the mound) and Max Lewis (.476 in six playoff games) played well in the playoffs.

The Chargers had a strong connection with Merrimack Valley High School this summer. The team was coached by Sean Wheeler, a 20-year veteran of coaching at MVHS, who himself played 11 seasons in the Sunset League, winning the 1991 championship with the Budmen.

Current MV pitching coach and former Eastern Illinois collegiate player Jake Kleckner pitched a full game over the hill in Game 4 to secure the championship, while former first-team player All-State Griffin Wheeler (now on Colby-Sawyer College) finished fourth in the league with a .393 batting average and had three hits and three RBIs in Game 4.

Other former area high school stars on the championship team include Bow High graduate Ethan Clark (who headed to Colby-Sawyer College in the fall), who had a 2- 0 with two saves, a 1.62 ERA and 15 strikeouts in 13 innings pitched in the regular season, and former Concord High player Tyler Wright (now plays for Plymouth State University), who went 2-0 with one stoppage and a 0.70 ERA.