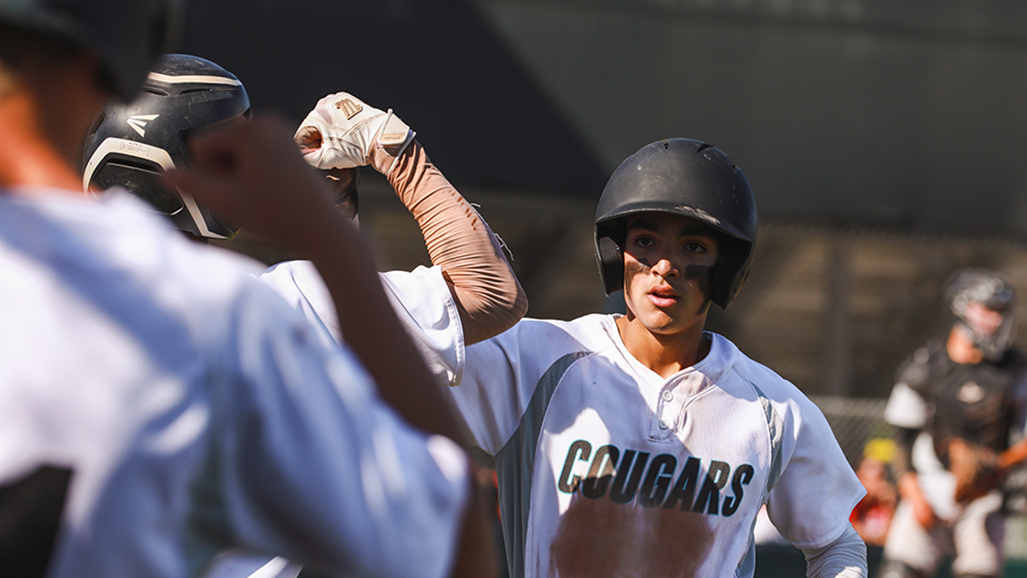 Aiden Simeon wasn’t sure if he was going to be able to play in Tuesday’s CIF Northern California Regional Tournament playoff game.

The Christopher High sophomore and a handful of his teammates fell ill in the days after the Cougars won the Central Coast Section’s Division V playoff championship on May 26. That’s why Tuesday’s lineup was a little different from what coach Ryan Dequin had for the CSC. title game.

The most notable change was at receiver, as starter Diego Enriquez was absent. Entering Simeon, and all he did was throw two base runners and go 3-for-4 to help lead No. 4-seeded Christopher to a 10-3 home win over Calaveras , seeded No. 5, in a NorCal Division IV opener.

The Cougars (13-16) advance to play top seed Colusa (32-0) Thursday at 4 p.m. in the semifinals. Colusa had their hands full with the No. 8 seed Branson in the quarterfinals before winning 5-4.

Tough competition awaits, but Christopher is trying to make history three months after the women’s soccer team won the school’s first-ever CIF Northern California Regional Championship. This is the first year the CIF has hosted a Northern California regional baseball and softball tournament.

“We just need to keep going for the next two games and we could be NorCal regional champions,” Simeon said. “It would be pretty crazy considering how we started the season. It’s a bit crazy to be in this situation.

The Cougars got off to a 2-9 start, but started to pick up their pace midway through the league season. Their resilience showed throughout the stretch run and on Tuesday as they knocked down a decent Calaveras team for 14 hits, including two homers. Calaveras went 14-1 dominating the Mother Lode League and winning the Sac-Joaquin Division IV title.

The Cougars got off to a shaky start, committing two errors in the top of the first inning, which led Calaveras to take a 1-0 lead. However, CHS scored three times in the bottom frame. Eric Cantu hit a first single, Will Anderson walked and Simeon hit a single to load the bases.

Ricky Wilkerson followed with a two-run single and Jaxen Robinson hit an RBI single to give the Cougars a 3-1 lead they would never give up.

Anderson hit a solo home run from dead spot in the top of the third inning, and Mateo Alcantar singled later in the inning to increase the team’s lead to 5-1. CHS opened things up wide with a five-run fourth, highlighted by Alcantar’s two-run homer to right field.

What appeared to be a semi-deep fly ball continued as any ball that had risen had a chance of leaving the stadium due to the wind. Alcantar had three game-high RBIs, and Anderson had another big game, reaching base in all three plate appearances.

Nicholas Valentine pitched the sixth and Anderson the seventh to close things out. In the fifth, Betancourt caught a screaming lineback before throwing to first base for a double play. The play sure prevented a bigger inning as Calaveras had already scored a run in the frame.

“Dylan is our ace for sure and I like when he throws,” Simeon said. “You just feel confident when he’s on the mound.”

The same could be said when Simeon is behind the plate. Normally the team’s shortstop — where he’s been terrific all season — Simeon played catcher for the first time since mid-March. Simeon said it would either be him or Alex Gonzalez and Dequin decided to go with Simeon, which turned out to be a great decision.

Simeon posted an absolute pipe for an arm when he took down a Calaveras baserunner attempting to steal second base in the second, then threw another runner who was leaning too far from the first base sack in fourth.

“I surprised myself a bit today because I was sick,” Simeon said. “Coach texted me before the game that I had to bring my (catching) gear. I’m always ready. Baseball is the only thing I’m really looking forward to now. is my thing. I spend the day at school just so I can come here and have fun.

Simeon admitted it was tough to get the dugout chatter as loud as it was for the CCS Championship game. But he said the players understood the magnitude of the moment and what it would mean if they could win a Northern California regional tournament title. CHS had a few players unable to play against Calaveras due to illness.

“Being a bit sick, I couldn’t bring my best energy,” he said. “But on Thursday I hope I feel a bit better and the team can go a bit further and have more energy in the dugout.”

Sportswriter Emanuel Lee can be reached at [email protected]