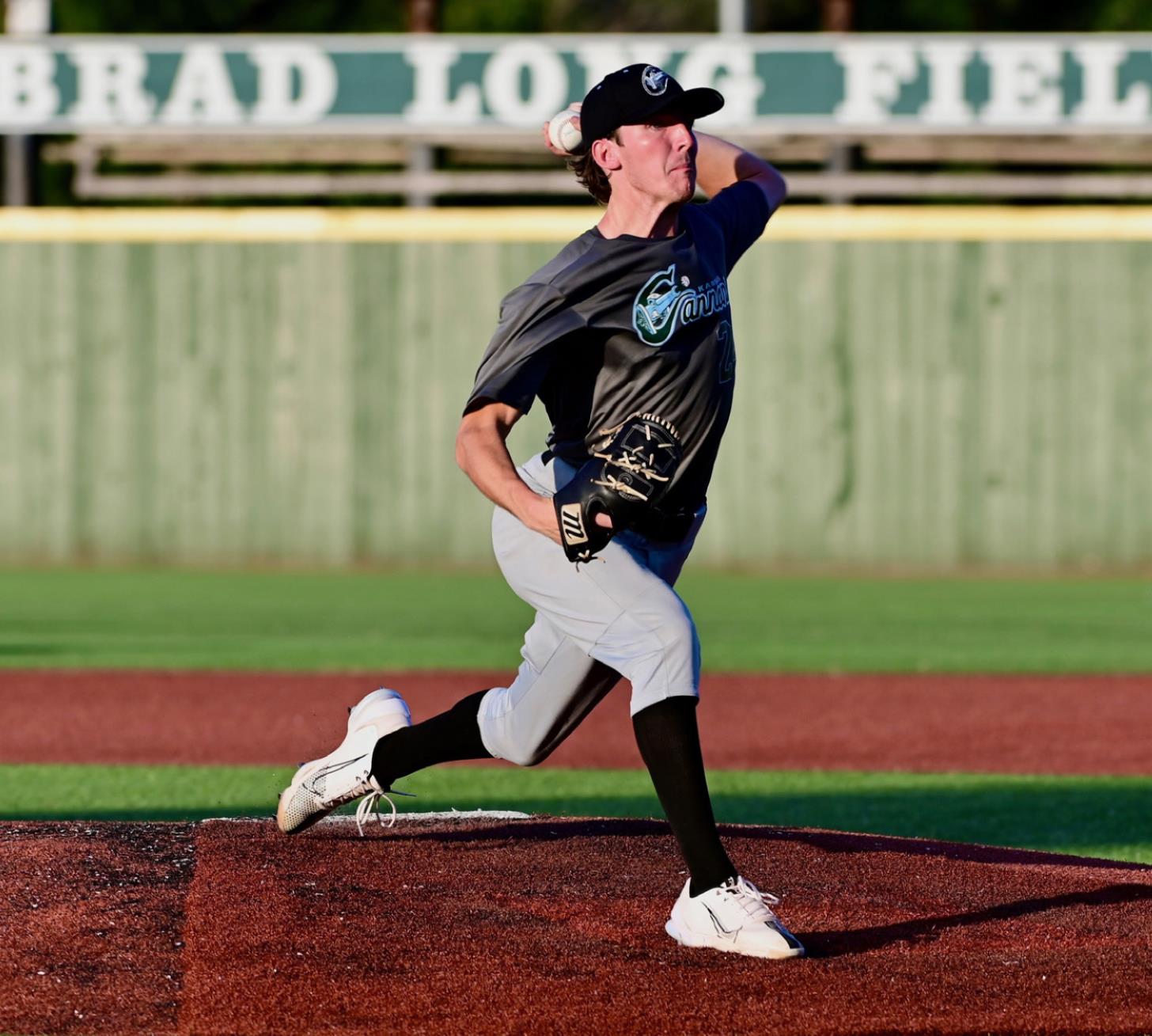 EL DORADO, Kansas – It was almost like it was straight out of the movie, The Sandlot, as fireworks erupted in the background as the Kansas Cannons set off some of their own fireworks fireworks at the baseball field Monday night.

The Cannons, led by nine strikeouts by starting pitcher Corbin Talley, beat the El Dorado Walnuts, 5-2, in what both teams hope will be an annual Fourth of July game at McDonald Stadium.

“It was fun,” Talley said. “I haven’t seen a crowd like this since our playoff game in Coffeyville.”

El Dorado and Augusta fans packed McDonald’s on Monday night, ahead of a big baseball game and for the postgame fireworks. Talley, who has pitched to Butler for the past two seasons, has felt right at home on the hump of his college stadium.

“It’s always nice to come back to where I played college ball for two years and feel at home again,” Talley said. “I’m just very happy to have had the opportunity to pitch here once again.”

Kade York of the Kansas Cannons finishes third to score a run in the sixth inning against the El Dorado Walnuts on Monday July 4 at McDonald Stadium in El Dorado, Kanas. PHOTO: Pablo Gonzalez

After a first innings run which was scored when another Grizzly, Brock Lummus singled right to score Booga de la Garza to tie the game. However, after this, Talley would settle down. El Dorado (10-7) never got the base runners to be consistently in the game to pose a real threat and Talley was the reason for that.

The Cannons managed to get on the board to start the game on a wild Kade Linn pitch and Robert Sharrar scored to make it 1-0 early in the first.

Sharrar followed that up with his first home run of the season, with a burst to right field, to make it 2-1, Cannons, top of the third. The Colorado Mesa product had a game himself, going 2 for 5 with two runs scored and his home RBI.

El Dorado’s Kade Linn didn’t throw badly, but he was chased down in the sixth when the Cannons were able to charge the bases with no outs to start the inning. Gabe Ramos scored a single to net Kade York from third to give the Cannons the lead for good. Rocco Gump, who was just named All-Star Monday afternoon, would score on a passed ball to make it 4-2. Then Zack Davis scored on a walk to make it 5-2 and the Walnuts were forced to switch pitchers.

El Dorado made its last threat in the seventh inning, loading the bases with one out. However, that’s when Tysaac Noland came on as a replacement for the Cannons. The Neosho County product dazzled in his 2 2/3 innings. He recovered the stoppage, but more importantly, he retired the next two batters to get the Cannons out of the jam. He struck out four and allowed just one hit.

For the Cannons, they have now won 15 consecutive league games. Their only two losses came to the Dodge City Aces and the Cheney Diamond Dawgs, two perennial summer college baseball teams. They walked through the KCLB, parting ways as if they were Alabama in college football. They secured a spot in the KCLB Championship at the end of the month. However, don’t tell them that there is nothing to play for moving forward.

“It’s not because you want the first half that you give up, you always try to play,” he said. “Guys always want bat meaning. We try to keep working to improve because we want them to leave here when they go back to their school to be a more efficient player. The only way to do that is to push guys.

17 games to go in the regular season for the Cannons. They are ready to defend their SummerBall Showdown at Goddard after winning the league.

“I’m really happy with how the guys approach each day,” Stephenson said. “And if you keep doing that, you give yourself a chance to win every night.”

Cannons and the Walnuts will play their final regular season game against each other Tuesday night at Rodney Wheeler at 7 p.m.

The Cannons are 3-0 this season against the Walnuts.

Bryce Harper of the Phillies was voted National League DH All-Star; will not attend the game due to a broken thumb