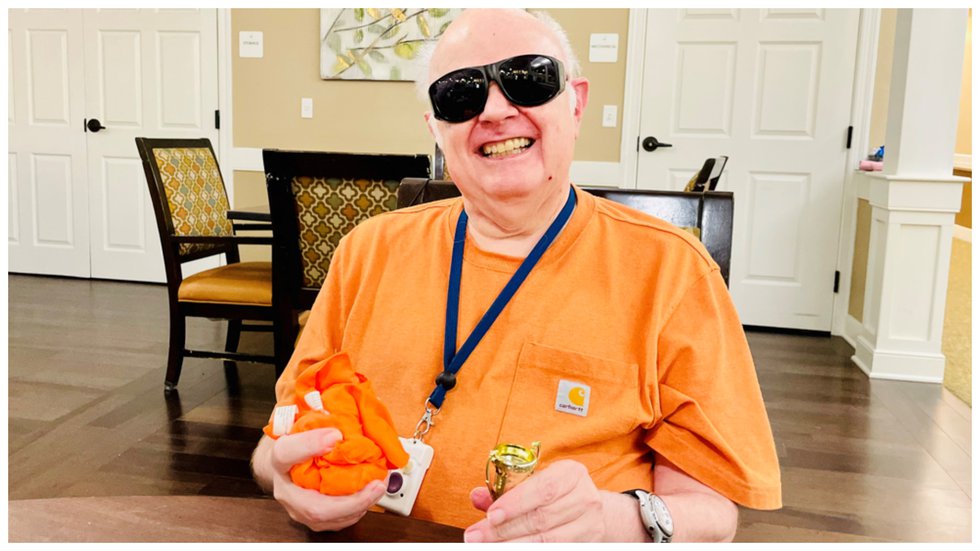 HEWITT, Texas (KWTX) — Ron Sembera, 75, of Hewitt may be blind, but he’s proving anything is possible at any age and despite challenges, as he racks up the wins in weekly friendly games but bean bag baseball competitions at a local assisted living facility.

Ron is part of a group of residents who play baseball every Wednesday afternoon at Stoney Brook in Hewitt, an independent living and memory care center for seniors who want to lead active lives. .

Competitors toss bags at a pitch-like board with the ability to land singles, doubles, triples and home runs.

Ron does not miss the opportunity to play.

“It just gives me something to do,” Ron said. “Not being in my apartment all day.”

The all-star poof player has plenty of fans to cheer him on.

Autumn Outlaw and Shawna Brewer, both marketing specialists at Bluebonnet Health Services, come in weekly to guide Ron to the perfect pitch.

“They tell me to throw straight and sometimes I throw sideways and maybe miss the board or go right or left, but most of the time I hit pretty well,” Ron smiled.

He has the stats to prove it.

His gambling success follows a lifetime of achievement for the blind.

Ron was born in Teague, partially blind, with a condition called aniridia, a serious and rare genetic eye disease in which the iris is partially or completely missing.

When Ron was six, his parents moved him to Austin to attend Texas School for the Blind, where he graduated from high school.

“One of the symptoms is that you have glaucoma, but I had pretty good partial vision for many years,” Ron said.

But his disability has always made things more difficult.

“If you’re trying to apply for a job, or something like that, doors are slammed in your face,” Ron said.

Ron never let challenges get in the way of accomplishments.

After graduating, Ron said he realized college wasn’t the right path for him, so with the help of a counselor he found something he would pursue during the next 30 years.

Ron ran a snack bar and worked in the vending machine business where he sold sandwiches, cookies and drinks.

In 1999, Ron returned home to central Texas, and in the years that followed, his vision began to fade.

“A doctor told me about 10 years ago that eventually I would lose my sight and about six years ago I lost everything.”

Ron is about to celebrate his fifth year as a resident of Stoney Brook.

While Craine says she wasn’t sure what to expect, Ron never ceased to amaze her with learning about the center’s layout and participating in all kinds of activities.

“One thing I would say about Ron is that he doesn’t let his visual impairment stop him from doing a lot of things,” Craine said.

Ron hopes his story will inspire others to never give up and invites anyone to challenge him to a game of baseball because all it takes, he says, is a little effort.

“Anyone can do it, blind or sighted,” Ron said. “They can at least try.”