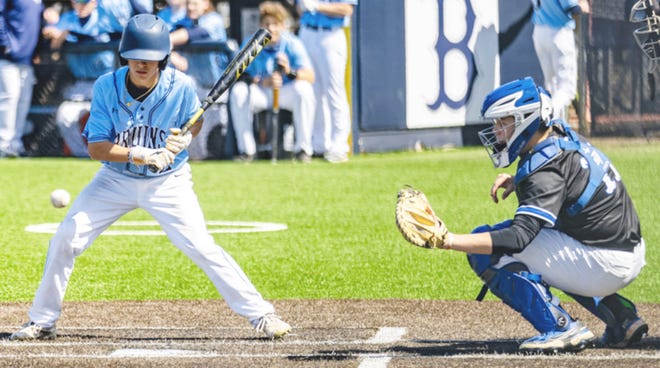 Sand Springs High pinched the Bruins, 6-1, in the final game of the Bruin Classic at Rigdon Field in Doenges Stadium.

But, the Bartlesville players – who are guided by third-year skipper Cody Price – could still look back with a smile on the previous week.

Second, this year’s team is the only Bruins team since before 2017 to score double-digit points in five consecutive games.

Earlier Friday, Bartlesville slammed Sapulpa High, 10-2, in what would cap off the stupendous streak.

Beginning with a 14-1 victory last week over Hugo High (Alabama) in a spring break tournament in Alabama, Bartlesville has amassed 58 points in five games, an average of 11.6 per game.

But, the Bruin bats — or at least the scoring offense — went cold against Sandite pitcher Kayden Campbell, who threw for a seven hit with two strikeouts and two walks.

Next, the Bruins will host at 6 p.m. Tuesday night at Muskogee High.

Below are more details on Friday’s contests and recent Bruin Jayvee action.

The Bruins earned Price’s 35th career win with that program.

Plunged by a throw, Bradee Rigdon scored a point.

Nik Johnson suffered the loss of the mound by misfortune. He dialed in with an edgy performance, working 5.2 innings, with a 93 pitch tally, scattering seven hits and giving up only two earned runs (one unearned). He also walked four and breathed three.

Bartlesville’s offense produced a respectable seven hits, led by Rigdon and Asher with two singles each and Henry with a double. Asher also dropped a sacrifice bunt.

The Bruins put the game aside seven points behind.

Bartlesville faced the agony of a narrow loss in weekend losses to Sapulpa.

In the 5-4 loss, Colton Hainzinger, Damien Niko, Kaden Romesburg and Hunter Shea each doubled for the Bruins.

Shea and Hainzinger had two and one points respectively.

The Bruins swept seven goals in nine tries — Jaxon Zaun and Grant Clark both stole two sacks without getting caught.

Sapulpa and Bartlesville struggled through a pendulum pattern – Sapulpa got up, 4-0, but Bartlesville took a fourth-inning lead, 5-4.