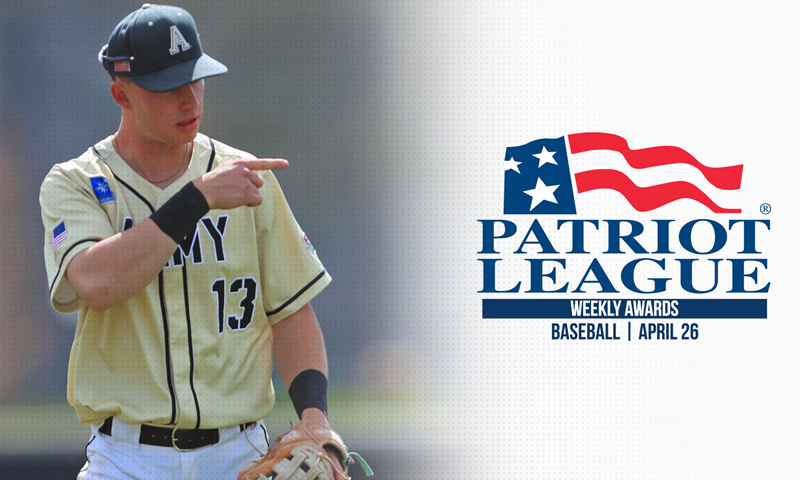 Announcement of Patriot League Baseball Players of the Week (4.26.22)

Ruta notched his first Patriot League Baseball Player of the Week after going .588 (10 for 17) with two home runs, eight RBIs and six runs scored to help the Black Knights go 3-1 last week to pass at 13-5 in the league.

Bloss earned his second Patriotic League Baseball pitcher of the week this season, throwing a complete 9.0 inning shutout to earn a 1-0 win over Holy Cross on Saturday.

O’Neill won Patriot League Baseball Rookie of the Year for the first time after striking out 13 in 8.0 innings in a no-decision decision against Lehigh on Saturday.

* Ruta batted .588 (10 for 17) with a 1.176 slugging percentage and .611 on-base percentage while hitting eight runs on four doubles and two home runs to help the Black Knights go 3-1 last week.
* He opened the week 3-for-5 with two doubles, two RBIs and two runs scored in a 15-3 win at Holy Cross.
* The sophomore third baseman combined to go 6-for-10 with two home runs, five RBIs and four runs to sweep Saturday’s doubleheader against Navy.

* Bloss pitched a shutout in 9.0 innings, scattering four hits in the Leopards’ 1-0 victory over Holy Cross.
*The junior right-hander struck out seven and walked two for his fifth win of the season.
* His 9.0 inning outing was the longest of his career, increasing his ERA to 3.40, third-best in the league among qualified pitchers.

* O’Neill struck out a career-high 13 batters in 8.0 innings against Lehigh on Saturday.
* The freshman right-hander scattered six hits and allowed two runs but didn’t feature in the decision in the Bison’s 3-2 loss to the Mountain Hawks.
*O’Neill has a best ERA of 3.80 in 42.2 innings pitched this season.

Honorable mentions
Connelly Early, Army West Point, So., LHP, Midlothian, Va./James River
* Early allowed three runs on five hits in 7.0 complete innings for his fourth win of the season in a 9-3 decision over Navy. He struck out seven and scored one in the win.

* Odell allowed one run on four hits in 7.0 innings pitched for his sixth win of the season in a 20-3 win over Lehigh on Sunday. He struck out a season-high eight batters and scored two goals in the victory.

* Chudy pitched 6.0 scoreless innings while allowing two hits and striking out five against Lafayette. The junior right-hander didn’t win a decision in the Crusaders’ 1-0 loss.

Jake McElroy, Holy Cross, So., RF, North Andover, Mass./North Andover
*McElroy hit .500 (6 for 12) while hitting .833 and reaching base at a clip of .571 to help Holy Cross split four games last week, including two of three at Lafayette. He’s been in four of his five runs in the Crusaders’ two wins over the Leopards.

*Rother hit .500 (8 for 16) while recording two home runs and six runs to help the Mountain Hawks go 3-1 last week. He hit .938 and hit base at a clip of .526 helping Lehigh defeat Lafayette and win two of Bucknell’s three games.

* Torres allowed one run on four hits in 5.1 innings for his second win of the season in a 7-4 decision over Lafayette. The junior right-hander struck out five and walked one.

Patriot League Player of the Week

Patriot League Pitcher of the Week

Patriot League Rookie of the Week

ABOUT THE PATRIOT LEAGUE

The Patriot League is in its fourth decade of academic and athletic achievement, continually demonstrating that student-athletes can excel both academically and athletically without sacrificing high standards. The Patriot League’s athletic success is achieved as its member institutions remain committed to its founding principle of admitting and graduating student-athletes who are academically representative of their class. Participation in athletics at Patriot League institutions is considered an important part of a well-rounded education.